The farmers markets are over for the year, our production is winding down and the long process of getting ready for winter has begun.

Add to it that we’ve been here on this farm for a year, and it seems like a good time to take a look back at the 2013 season. 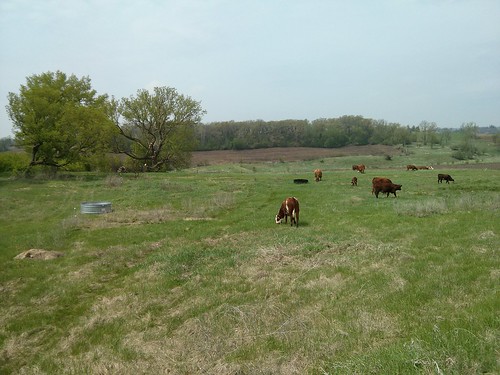 Overall it was a very good year.  We were caught off guard by the demand for meat and eggs at the farmers markets that we attend. The whole season seemed like a constant scramble to keep up with demand.  We sold 50% more beef than we had expected, and fought tooth-and-nail to keep enough pork, chicken and eggs to sell.

We attended 3 farmers markets this year and will likely keep all 3 markets for next year.  In Eagan we immediately recognized that the market there was a keeper.  The Red Wing market was a bit slow to take off, but near the end of the season our Red Wing sales had grown to 70% of Eagan’s sales.  Not bad for a town that’s so close to us.  The Zumbrota market is our hometown market, so we didn’t exactly go in expecting to sell much.  We didn’t end up selling much in Zumbrota, but it helps us meet our neighbors and contribute something to the local scene. On the plus side, it looks like the Zumbrota market will be under new (very capable) management for next year.

For starters, we’ve had just about 10 years of deferred maintenance to catch up on around here.  For the past 10 or so years this farm was owned by a property development group.  They were apparently planning to bulldoze the whole place and put in a big subdivision.  That plan stalled out with the county zoning department, and then the housing bubble popped.  So the farm sat, the buildings rotted and the pastures grew up in weeds and trees.  After all, why bother to maintain a place you’re planning on bulldozing someday soon?

For the past year we’ve been tackling the most urgent projects: fixing the chicken coop, cleaning out the barn, fixing a few doors and gates, installing a new waterer and building lots of fence to keep all the critters in. That’s to say nothing of all the plain old boring “cleaning-up” that we’ve been doing.  By now we’ve got some pretty impressive piles of scrap-metal, brush and old boards.  It would be easy to complain about all the work, but we knew exactly what we were getting into.  We must just be gluttons for punishment.

We really grazed the heck out of most of the pastures this year.  I’d go so far as to say some of them were downright overgrazed.  For our pastures, this year, that was actually a good thing.  Hungry cows can do a lot of damage to scrubby trees that are trying to take over a pasture.  Once the cows “grazed” on the trees enough that we could see through, the tractor went in and mowed down the trees with the brush-hog.  The lots around the barn were tag-teamed with cows and pigs to get rid of all the weeds and brush.  With a little mulch and reseeding, we ought to have quite a bit more grass to graze next year.

We bought the farm this year with the cropland already rented out.  A local fella (a guy that actually grew up on this farm) has been farming the cropland this year.  We would like to start farming the cropland ourselves, even planting some non-GMO corn (or other grain) to feed to our animals. Unfortunately, it doesn’t look like we’ll have the time or equipment to do our own cropping in 2014.  Another year of renting out the crop land will allow us to focus on the really important stuff that needs to be done.

In 2014 we expect to still be plugging away at that decade-long backlog of maintenance and repairs. Hopefully we can finish up our perimeter fencing, get more water out on pasture and really start rotationally-grazing the cattle and pigs.  The Farm Store needs a new roof, the Well House needs to be torn down, the Chicken Coop and Barn both need some structural repairs, and we hope to get most of that accomplished within the next year.

In the midst of all that we hope to keep adding to our wildlife projects, encouraging barn owls, barn swallows, bats and tree swallows to take up residence here.  It helps them by expanding their habitat, and it helps us because they eliminate pests around the farm.

I’m going to write an individual post about each farm enterprise and I’ll link them all back here when they’re posted. I like the idea of keeping it all out here on the internet, it makes it a lot easier for me to look back and see where we’ve been and how far we’ve come.

Tags: State of the Farm
By Andrew