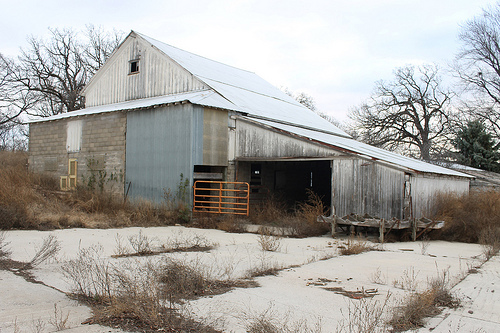 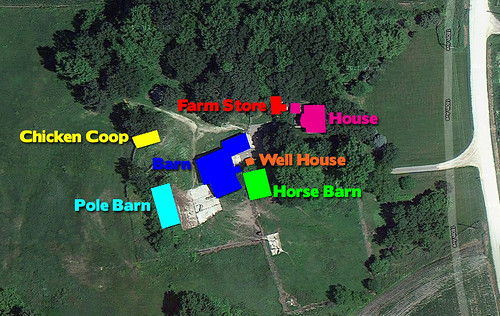 So straight ahead we have the main door to the barn, a dutch-door wouldn’t you know? Up at the top-left you can see where the electrical service comes in. There are a couple loose wires up there that aren’t hooked up to anything. After further nosing around, it looks like those wires go to the chicken coop, and will need to be reconnected for the coop to have power. 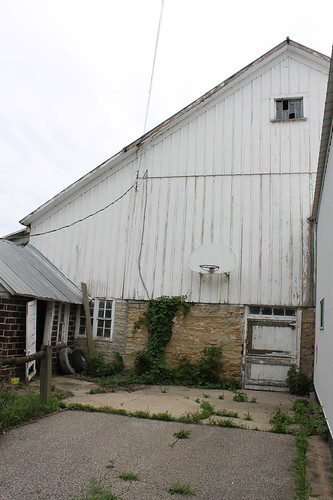 From my best guesstimation, the barn is probably just as old as the house (1890) because they both have the same fieldstone foundations, at least in the oldest parts of each building. 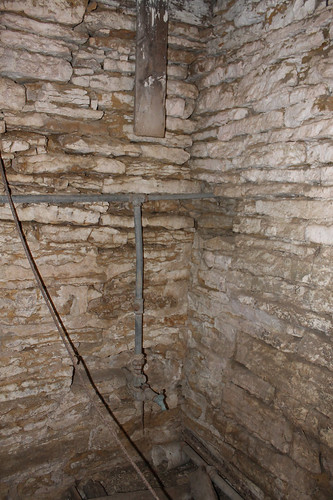 The galvanized pipe sticking out of the wall used to be fed by the cisterns just uphill from the barn, that is until they were filled in. Oh well

A little further in, we run into this big old Fairbanks livestock scale. It’s just missing the main counterweight. If I can find that somewhere we can weigh all the cattle we want. 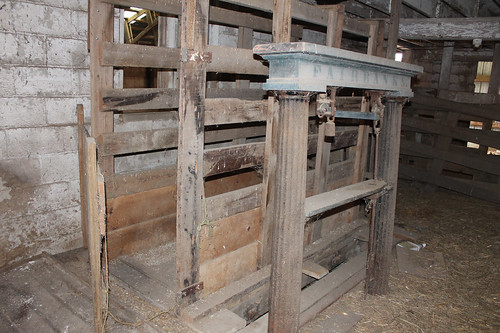 Turns out it’s not exactly a new model, this is a catalog from 1906.

Then there’s this headgate. We initially thought it was a headgate for sheep or something. But after talking with the previous owner of the farm (who owned it from 1966-2004) He said it’s the headgate he used for his Charloais bulls. I really don’t want to know how anyone convinced a 2000lb Charloais bull to stick his head in this little thing. 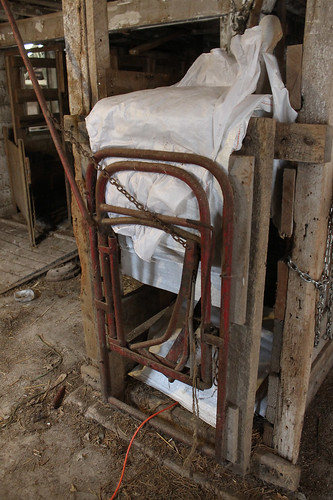 Not much else inside the barn, a few dairy-cow turned horse stalls, but that’s about it.

Here’s the back corner of the barn. On the left you can see the doors that I replaced to the room that the brooder room. Every wall of the barn is either wood, stone or concrete block except for the South-West corner, which is tin.  Strange… 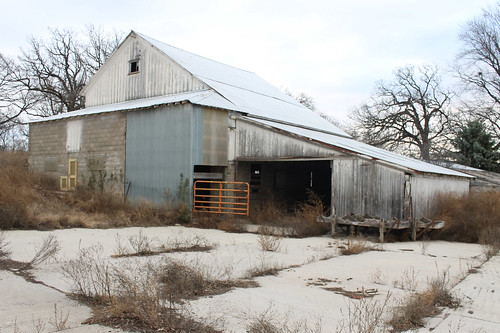 Just inside, a giant circular cutout is the tell-tale sign that there used to be a silo attached to the barn. When it was torn down, the new tin wall was erected to keep everything enclosed and whatnot. 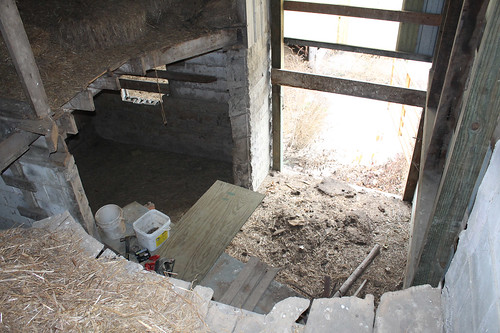 Under the lean-to addition you can see what used to be the exterior wall of the dairy barn. Complete with the textured cinder-block walls and dutch-doors like any good Minnesota dairy barn should have. 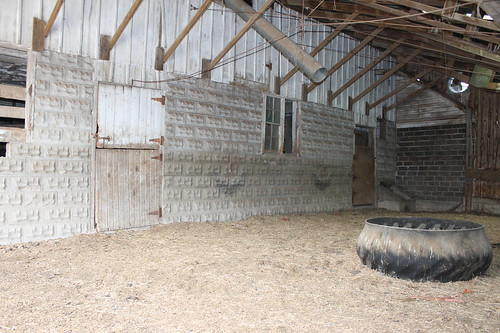 On the uphill (North) side of the barn there is a nice big sliding door to the hayloft. Notice the sag in the roof? 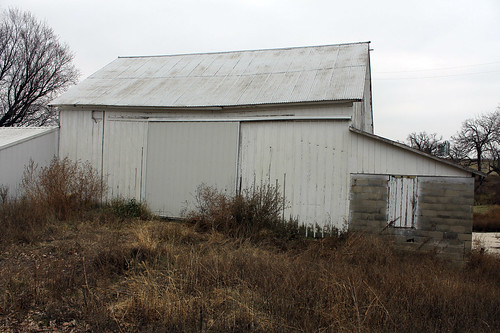 It’s quite roomy in the hayloft. Plenty of room to store some hay. And judging from the number and size of the rafters and pillars underneath, it can probably support the weight of a tractor (maybe two). 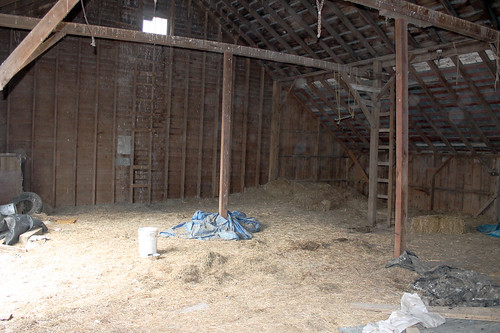 Oh, and that sag in the roof? Yeah, that’ll happen when the sidewalls on either side of the door come off of their footings. That’s a good kind of problem to have. Easy to fix. 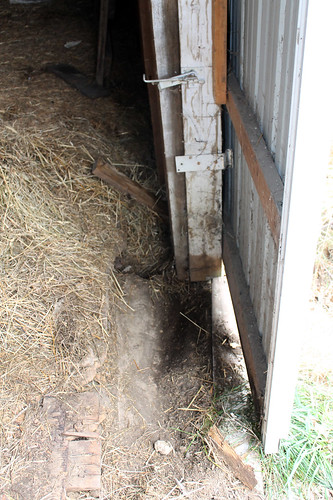 And last but not least is the newest addition to the barn is the Pole-barn style garage that was added on to the West side facing the house. 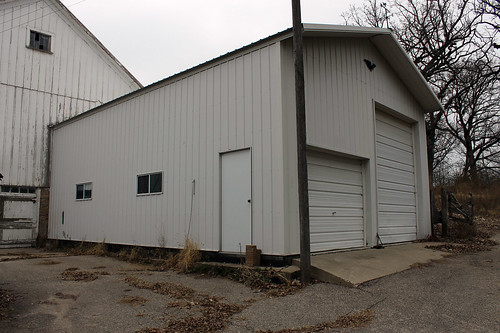 It’s got one regular garage door and one RV-sized garage door. We might be able to fit a tractor in the larger bay, but that’ll depend on the width of the tractor. Either way, it’s a nice building. It’s got a concrete slab floor and electricity, so it’ll make a nice shop.
While it does share part of the back wall with the barn it does not have a working door to go directly from the garage to the barn. 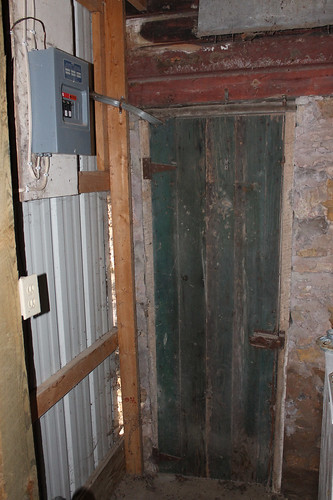 In the back corner there is this teensy little door, but they poured the concrete right up to the door, so it won’t open. And when I say teensy, I don’t mean it’s a 32″ door instead of a 36 incher. This thing is probably only 18″ wide, you’d probably have to walk through it sideways as to not scrape your shoulders on the doorframe.
And there is something else unique in the picture. This is the only electric panel on the farm that has actual circuit-breakers in it. Nice to know I don’t have to buy fuses for at least one panel.