We went into our first year with pretty low expectations.  Better than having high expectations and being disappointed later, right? 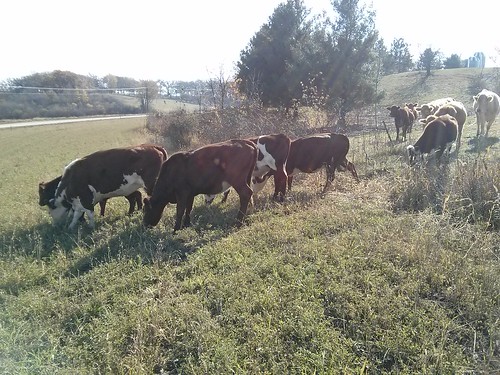 Well, turns out that the downside of low expectations is that if you run into the right kind of market, you just might be gobsmacked by the demand.
That’s pretty much how we felt about selling beef this year.  It was a constant battle to get butcher appointments in time.  At the beginning of the year we had no idea who which butcher we should use, which complicated matters even further.  We quickly figured out that the first butcher we used, Lorentz processing in Cannon Falls, wasn’t going to work out for us.   When the first cow sold out quicker than we expected, we called Lorentz to schedule another butcher date.  This was in mid-June.  They informed us that they *might* have one open spot in September, but they wouldn’t know for sure until August sometime.

Instead of waiting around for 3 months with nothing to sell, we started using Huettl’s Locker in Lake City, the same butcher we use for our pigs.  That makes the logistics much easier for us, since we can take cows and pigs to the butcher in one trip, and pickup all the meat in the same place.

Once we’d had a cow butchered by Huettl’s we quickly figured out that we like working with them better anyway.  Huettl’s is a small father & son outfit that does pretty much everything.  They do beef and pork, custom processing for our whole, half and quarter customers, and USDA processing for our farmers markets.  We can usually get an appointment inside of a month, and they’re generally really easy to work with.

With the cow-calf herd, it was a more difficult year.  Very early in the year, while the cows were still in Missouri, we lost a cow just after she gave birth to a calf.  And it wasn’t just any old cow, it was one of the 5 best cows that we decided to keep.  Before moving up here to Minnesota we sold off most of our older and larger cows.  There just wasn’t any sense in shipping a cow across state lines and feeding it through our first Minnesota winter unless it was a really good cow.  So to have one of the 5 good cows die during calving wasn’t exactly a great start to the year.

This summer, our 4 mama cows gave birth, but the first of the 4 calves was stillborn. Drat.   So this year we sold 7 calves, but only added 4 to our herd.

We were lucky in that we brought all of our weaned calves up from Missouri last year.  That meant that we always had a few calves that were big enough to take to the butcher.  Going into next year, we’ve got 9 calves that will be ready (at various times throughout next year) to go to the butcher.  We’re making plans to sell 12 cows next year.  That means we’ve got to buy 4 weaned calves sometime before spring.

The second continuous battle that we were waging this year was the battle to build fences faster than the cows could eat all the grass contained therein.  You may have noticed a few posts about our fence-building exploits, but that just scratches the surface.  This farm had about 2 acres of securely-fenced pasture when we moved in.  Not even close to being enough for 25 cows.   Now at the end of the year we have close to 40 acres of securely-fenced pasture.  That’s a lot of fencing that we don’t have to do next year.

As we get more fence built, we can start rotationally-grazing, which will boost the carrying capacity of our land.  It’s been amazing to see how these long-neglected pastures have responded to being grazed again.  The cows have knocked back a lot of the invasive trees and brush, opening up more soil and sunlight for grasses to grow.  Moribund old pastures have been rejuvenated by the more indiscriminate grazing of the cattle, with many long-dormant forage species popping back up in the cows wake.  I’m really excited to see what the pastures look like next spring!

Next year we’ll need to start rebuilding our brood herd, adding a few more cows and (maybe) replacing the bull.  We’ve kept a few of his daughters back to be mamas next year, so he’ll need to be replaced with another unrelated bull.  We’ll also need some feeder calves to make up for our diminished breeding herd. We are looking into applying for a cost-sharing program to build fence and water-lines for a rotational grazing system through the NRCS.  If it works out, we’d get a lot of our grazing infrastructure into place next year.