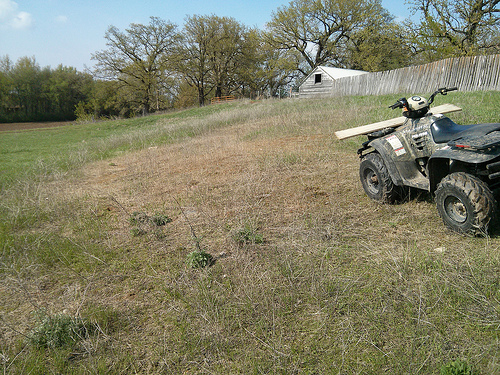 If you remember from way back this past fall, I might have mentioned something about having a barn with a hayloft full of old loose hay and straw. This wasn’t a big deal until spring came, and we decided that it might be nice to have the hayloft cleaned out so we can actually use it. The hay and straw is a good 6-12″ thick in most of the barn, so that’s a lot of stuff that’ll have to go. We’re using the straw to mulch the garden. A few of the bales of hay are still in good enough shape to feed to the cows, but most of it’s so old that it’s junk. There’s some old alfalfa hay, pretty bleached out and brittle by now. And some old timothy & orchard-grass hay that’s past it’s prime.

So what to do with it all?

Well, I remembered something that I heard during a farm walk with the Green Hills Farm Project. I can’t remember exactly who, but the farmer was talking about how he’d buy old hay specifically to roll out on his weakest pastures. The cattle would then stamp it into the ground, adding organic matter and seeds.

Wouldn’t you know it? I’ve got a little bit of old hay to spare. And I know of a few spots in the paddock just over the hill from the barn that could use a little help. Sometime back before the 1960’s the state built up Highway 52 through Zumbrota to it’s current divided-highway size. In so doing, they built an overpass about 1/2 mile from our farm. Apparently, most of the fill material needed to build the overpass was taken from our farm, leaving a big gash in the otherwise good soils of our pastures. Most of the “gash” has healed itself fairly well over the past 50+ years. But the hillsides, like the above specimen, haven’t fared so well. It’s all exposed rocks, sandy soil, lichen and weeds.

So one load at a time we’re going to try to bring this particular pasture back. Old hay spread over the weak spots, cows trampled it in, and just in time, we got some rain.
Now we need to follow it up with a few laps of the pastured chicken pen and we might get this paddock back into shape.