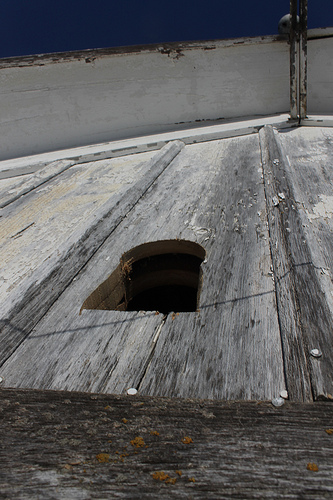 As I mentioned at the end of my last post, I’ve been seriously rethinking the use of Rodenticides (Rat Poison) here on the farm.

Mice are a problem on most any farm. Any place you have a non-airtight building, like a barn, and lots of animal feed, you’ll inevitably have mice.

Rodenticides are all too often the go-to solution for controlling a mouse problem.  When we moved here to the farm there were buckets and buckets of rat poison in the barn and outbuildings.  Heck, the local farm supply mega-store has an entire aisle of the stuff.

The good thing about rat poison is that it works.  Mice die when they eat it.

The negative consequences, however, are harder to see.

Mice are regularly picked off by birds of prey, leading to poison building up in the bodies of the birds.  Barn Owls are particularly susceptible, with 70% in Canada, and 91% in the UK showing detectible levels of Rat-Poison in their bodies.  Is it any wonder that Barn Owls are said to be “extremely rare”, and in decline in Minnesota?

While Barn Owls are listed as a species of “Least Concern” by the folks that make up the Endangered Species List, their numbers have plummeted by 60% in North America from 1966 to 2002.

So no more rat poison.

But what to do to keep all the little mouses under control?

How about trying to attract some of those voracious barn owls?  I mean, they’re too small to eat chickens and they eat the heck out of mice.  Sounds like a good fit.

It even looks like farmers used to be quite accommodating to barn owls, giving them free access to their barns (via Eulenloch, or “Owl Holes”) in exchange for their rodent-hunting prowess.

I’m not a huge fan of an open-barn-door policy.  I’ve already got a few pigeons that have taken up residence in the barn, and they make quite a mess. How then to give the owls a place in the barn to nest, but keep the poop out?

I started out with a nice box.  About 12″ x 16″ x 24″ per the larger sizes of barn owl boxes.  I just made one out of random scraps of wood I had laying around the workshop. Then the real fun begins.
Now it’s time to drill a big hole in the side of the barn. And way up high off the ground to boot. No big deal, just climb 20 feet up an extension ladder and start drilling with a 4″ hole-saw. It’s difficult enough to handle a big drill and hole-saw on the ground. Doing it up on a ladder is…challenging. Taking pictures up there is challenging. It makes me have a purdy face. Enlarge the hole with a reciprocating saw, and we’re ready to put up the box. First put some sort of bedding in the bottom of the box, apparently barn owls won’t go collect their own bedding for a nest, so it needs to be provided for them. I used a handful of straw.

Then there’s the small matter of carrying a heavy bulky box up a ladder and screwing it to the side of the barn with your one free hand. You do have a free hand don’t you?  Oh, and don’t fall to your death.  That would be bad. I finished up by stapling some bird netting across both windows in the barn. There used to be glass in the windows, but as with a lot of things on the farm, it ain’t what it used to be.

So now the pigeons have been evicted, and we’ll keep an eye on the nest box to see if we can get any interested barn owls to show up and start munching on some mice.