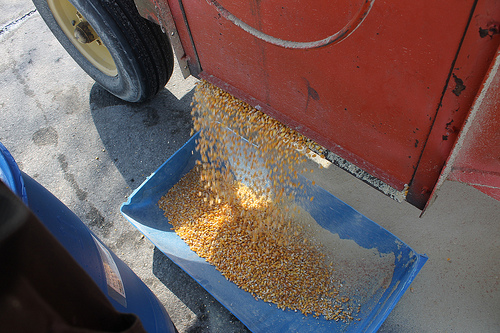 So it’s now March, and I’ve long since blown by the $200 mark with the pigs.
Judging from my receipts, I passed $200 on February 7th.
Turns out that bagged pig feed is expensive.

That’s a big jumble o’ feedstuffs, and it bears a little bit of explaining. First, we started off feeding bagged hog grower that I picked up at Fleet farm. The pigs liked it, and it was unmedicated and convenient enough to pick up, but it was expensive at $659/ton. I had to find something else to feed them.

So I was pleased to find out that the feed store in Pine Island had much cheaper unmedicated hog grower at only $449/ton.  It’s cheap, and a complete ration, but it’s ground into a really fine, almost powdery mix, like cornmeal.  Maybe it’s just me, but I think the pigs enjoy eating the whole grains better.

That’s where the Corn and oat mixture came in. It’s only $400/ton, and substantially less if you start out with some free corn. The free corn, however, doesn’t last very long.

That’s better, even when I had to buy more corn, but there was still something bothering me.

You see, I was buying 50# bags of corn for $8.80. That seems downright cheap compared to other bagged feeds, but it’s awfully pricy when you compare it to the commodity price of corn.
Right now corn costs $7.08 per bushel. A bushel is 56#.
So getting your corn in a bag costs you an extra $1.72 and you get 6 fewer pounds of corn.

As with most things, buying in bulk is wayyyy cheaper.

And until recently, I couldn’t buy in bulk because I had no way of transporting or storing bulk grain. But then last week, there was a big farm-equipment auction in Racine, MN. My dad was in attendance and picked up this Gravity Box. It’ll hold a few hundred bushels of corn, and as long as it’s not anywhere near full, my little Honda can pull it just fine. Handling is a little more work with bulk grain right now. I’m storing it in (what else?) plastic barrels. Two barrels was more than enough for the amount I brought home. I figured that I’ll need 6 barrels to store 1 ton of corn, probably a few more in reality, because a barrel full of corn is a real pain to move, even with a hand-truck.

So, all the corn is moved indoors (in the farm store for now) and soybean meal and A-D-E vitamin mix is in there with it. Right now I feed them that mix in the morning and let them finish off some of the hog grower in the afternoon if they’re still hungry.

I’m not so sure that the vitamin premix is necessary since they’ve got free choice alfalfa hay, but I figure it’s better to be safe than sorry. Maybe it’s just the “coming off of the pre-mix ration jitters” but I feel like I’m probably missing some important nutritional item that’s going to make all the pigs grow a third ear or something. I just keep reminding myself that the complete hog rations are most important for the folks raising their hogs in a barn on a concrete floor. They never get to go outside and root around in the dirt for their minerals, or eat some tasty alfalfa hay to get their vitamins.

The best part about the new ration is the price. The current batch is $403.13/ton. For the next batch I’ll be ditching the soybean meal (which has already had the oil extracted from it) in favor of roasted soybeans which the local mill sells in bulk.
That’ll bring my feed cost down to $368.24/ton. That’s $291.36 less (per ton) than the bagged feed that I started out with, almost cutting the price in half.

Plus, we get to feed our pigs unprocessed whole grains. That’s a big plus in my book, because less processing means fewer emissions, and it makes it easier for us to transition to non-GMO grains later when we get more bulk storage space.