We’ve had a few lady-pigs for a little while now, but with only a cursory knowledge of biology, I was pretty sure we’d need a boy-pig of our own to make things work out.  I’ve been talking to Wayne at Green Acres farm for a while now about getting a Tamworth boar pig, and he emailed me a few days ago to let me know I could come pick up a pig.

I came back home Sunday afternoon with this little fella. 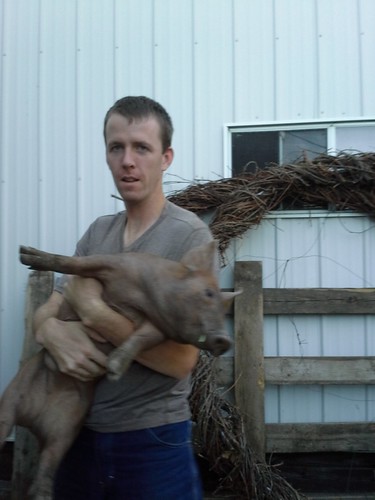 He was met with many squeals of “Oh how cute!” (from my mother and wife, not the other pigs). The other pigs were a bit indifferent. So we closed him off in a section of the barn and left him to calm down from his trip and acclimate to his new digs.

He had other plans.

Oh hell, they’re barking at the new pig, who is looking for a way under the electric fence and out into the countryside.

Thus began an epic 2-day pig-chasing extravaganza.
The little boar mostly hung around the farmstead, defying all attempts to contain him. He munched on acorns under the oak trees around the house, he grazed and rooted in the alfalfa field, he lived off the land and found every gap in every fence that he could possibly squeeze through. 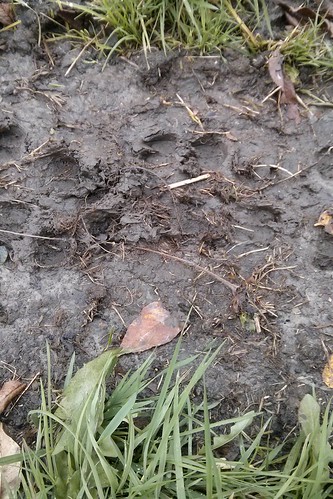 We tracked his movements as best we could, trying to corral or corner him. But if you were lucky enough to spot him, you had to try with all your might to keep him in sight. One momentary glance away, one shortcut around a building, and *poof* the little boar would disappear.

So Monday night rolls around, still no luck catching the wayward pig. It’s getting dark, and I glance out the window towards the neighbors house across the road.

So Monday ended with one last bout of pig-chasing, ending as the little boar retreats up the neighbors driveway faster than I can follow on foot.

On Tuesday, I wake up and do my pig-searching routine, but the little pig isn’t in his usual places. He’s not under the oak trees, he’s not in the alfalfa.
After lunch, I head across the road to search around the neighbors house. The neighbor has a now-defunct elk farm, complete with 10′ tall woven-wire fences. There are only a few places where a little pig could squeeze under the fence, and sure enough, there are tracks!

After calling the neighbor to get permission to go back and pig-hunt, I find an unlocked gate, arm myself with the trusty dip-net, and set out hunting. 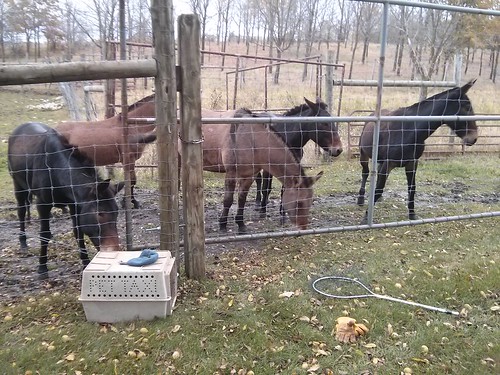 The neighbors 10 horses and mules cannot help but investigate this new situation, following me around the entire time.
After tromping about for quite a while, I’m in the very back corner of the neighbors property. I haven’t seen the pig, I’ve hardly seen any sign of him (tracks or rooted-up spots) and I’m about to head back home… 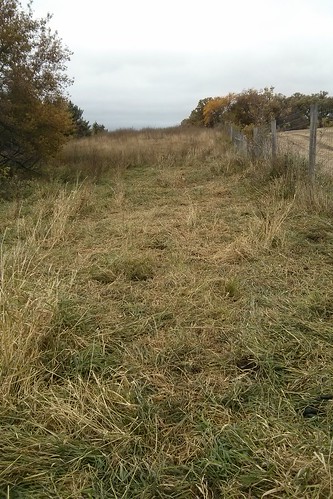 But what’s that sticking out behind the tuft of grass in the distance?
It appears to be two ears and a rump.

The little boar knew he’d been spotted. He glanced nervously at me, then at the mules.
The mules stared back.

And then, the little boar moved.

The instant the mules saw the pig move, the chase was on. Three big mules chased the little pig as fast as his little hooves could carry him. Unfortunately for him, little pig hooves are not as fast as big mule hooves. The mules caught up to him pretty quickly, and that’s when the squealing began.
It took about 2 minutes for the chase to end up on the other side of the property, with the little pig cornered against a building by a whole pack of horses and mules.
I hear a lot of squealing, and run to intervene, hoping that my pig is not currently being stomped to death by the mules.
I encounter one very worn-out pig who halfheartedly tries to escape the dip-net before deciding that he’s done fighting. 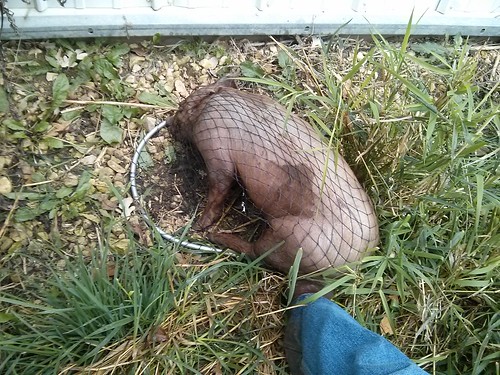 I pick him up, fend off the mules and get him back home.
But this time, he goes in the pig version of the ultra-max penitentiary. 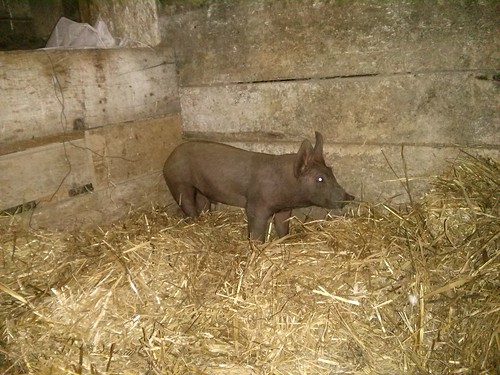 He’ll be there a few days, until he can figure out that we’re actually pretty nice people and that he ought to stay inside the fences.

I had already come up with a name for the boar. He was going to be named Harold, after a Drive-By Truckers song, but that no longer seems to fit.

After two days of disappearing acts and narrow escapes, this little fella earned himself a new name: Harry, as in Houdini.