With winter coming on (though very slow to arrive this year) we’ve moved the chickens into their winter abode, the chicken coop.  Since we’re getting close to the maximum capacity of this sized coop this winter at about 400 hens, we’ve been paying special attention to the care and feeding of said hens to (hopefully) keep them in prime condition over the winter.

Eggs have always been in high demand so expanding our egg production has been of keen interest.  This is the first year that we’re going into the winter with a chicken coop that’s pretty well sorted out.  We recently did the last of the major work on the coop, as well as overhauling the chicken’s feeders and waterer. 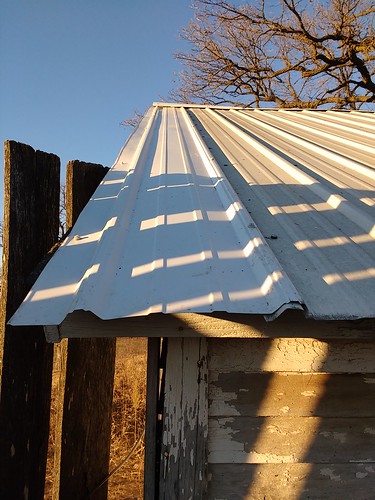 As well as adding the last 12″ of steel roofing that someone neglected to put up years (if not decades) ago. 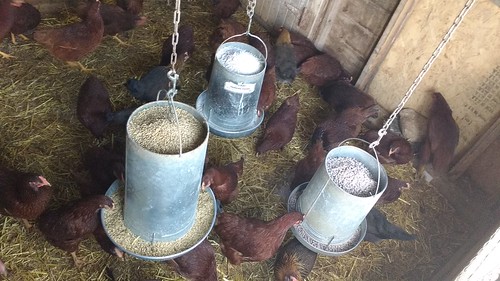 We’re adding a few extra feeders this year, one each for a few extra supplements to keep the chickens healthy and happy.  One feeder holds grit, basically small rocks, that the chickens need to help grind up their food.  One holds oyster shell, a major source of calcium – think egg shells.  And the third holds barley.

We raised a lot of barley this year and it ought to work out well as a supplementary feed for the chickens over winter.  Chickens need a bit more energy during the cold months, and barley fits the bill as well as anything.  It’s even supposed to cut down on feather-pecking and cannibalism which would be an excellent side effect.

We’re still using deep litter bedding for the chickens, but with 400 of them the litter is building up much faster than before.  It’s already about time to clean out the coop and I anticipate a few cleanings will be necessary throughout the winter.

Everything’s going pretty smoothly so far, between the deep litter and the increased number of birds the coop stays pretty toasty inside even though it is not heated.  The temperature has been fairly consistently at least 10°F higher inside the coop than outside. Most of the time it’s been 15-20°F higher inside, meaning that it’s never been below freezing inside the coop so far this winter. 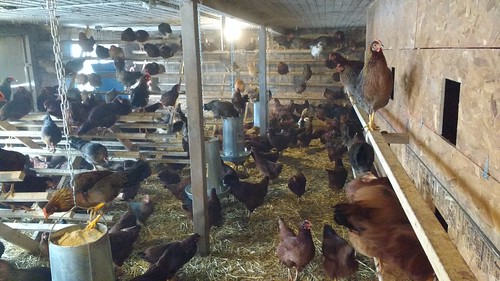 Comfy chickens lay more eggs, at least that’s the theory.  And right on queue our young hens who we got as chicks in July have just started laying their first pullet eggs.  Don’t worry egg customers, eggs are coming!