At long last winter is upon us. 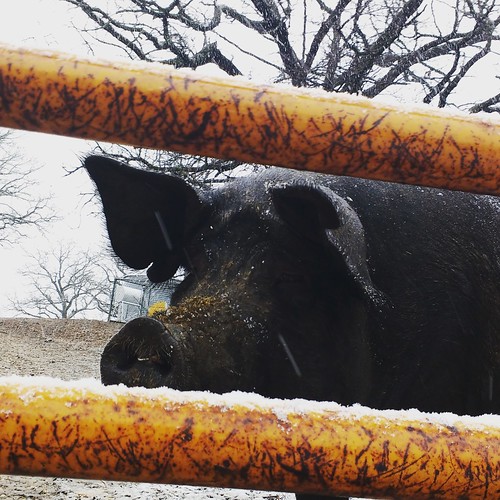 We’ve endured an extra month or two of very warm (above freezing) weather to kick off winter this year. I, for one, am thrilled to have below-freezing temperatures here to stay. Frozen ground is lots easier to deal with than nonstop mud. I’ve got three years of farming in Minnesota winters under my belt so I thought I’d take the opportunity to bloviate about winter clothes to those of you who care to listen, or read as the case may be. Winter clothes have been on my mind lately because I just had to replace my entire getup because I wore all of it out at the end of last winter. 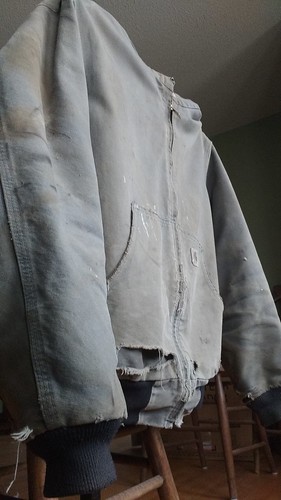 This jacket has seen some stuff.

So, jackets…
My old run-of-the-mill Carhartt jacket was pretty awesome for a number of years before it ended up looking that bad. The rip-stop Carhartt jacket only made it one year. I’m now trying out a new (much more heavily insulated) Polar King jacket that’s working out dandy so far. As best I can tell the Carhartt stuff is all the same duck (canvas) shell with different linings that make for the different price-points. The Carhartt “active jackets”, which are reasonably priced, are not exactly very warm. I just took to wearing a heavy fleece jacket under it when the weather dropped to the freezing point. Sure, they make jackets that are warmer, but they run 50% or so more.

My first winter here in Minnesota I happened upon some insulated bibs in a farm co-op the next town over. They were Polar King bibs and I LOVED them. They lasted two years until the main zipper blew out. That’s not all-together disappointing given how hard I can be on clothes. I promptly replaced them with the exact same thing. If it ain’t broke…

The other big peice of winter gear is insulated boots. I started off with a pair of Kamik boots, which were fantastic for a while. Unfortunately they didn’t stay fantastic for very long. They’re insulated with a thick felt liner which inexplicably breaks down or wears thin fairly quickly. They also have the annoying habit of accumulating any stray bit of hay or straw in the felt lining which can only be removed with a ritual sacrifice or two.

Oh, and one last bit of *almost* winter gear. When it’s not quite freezing you may encounter a condition that I like to refer to as “snice” some may use the more widely-accepted term “sleet”. Either way, it’s somewhere between snow and rain and it’s terrible. Wearing the typical winter getup in snice will only result in overheating wile being soaked to the bone. 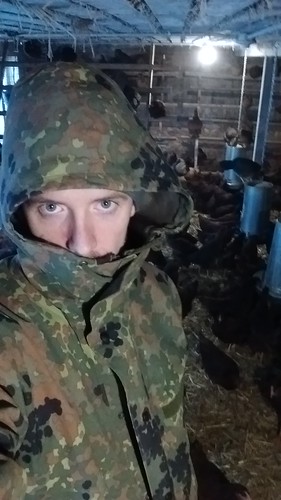 Rain gear is therefore essential for these few weeks (or months in the case of this year). The best rain gear I’ve ever found has been a German military surplus “flecktarn” camouflage gore-tex suit. The hood is epic, hands-down the best ever. The only problem is that the chickens are scared of it for some reason.

Oh, one last tidbit.  I’ve been buying most of my stuff through the Working Person’s store but I’m pretty ticked off at their pricing.  I noticed that every time I add something to my online shopping cart the price goes up.  See a jacket for $64.18, click “buy” and suddenly it’s $79.99.  Not cool guys.

Tags: Equipment, Things that are Awesome, Weather
By Andrew