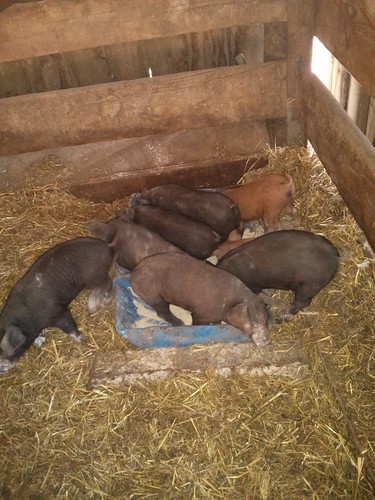 The piglets are old enough to be transitioning over to feed. Today I gave them their first trough of feed in their creep area. I wondered if they’d be interested.  The answer was yes, they will be quite interested, if a bit unsure of how this eating-from-a-trough thing works.

In an effort to get another litter of piglets in the warmer months, I’m going to speed up weaning piglets.  I’ll be shooting for 5 weeks, which is not fast by commercial standards, but a fair bit quicker than the 8.5 weeks we were using last year.

The piglets will be lighter when they’re weaned, which means they’ll need the smaller “shoat” rings in their noses. It should mainly be a matter of keeping my eye on the two runts (from the same litter, guess who’s?)