We weaned the last summer litter of piglets today. 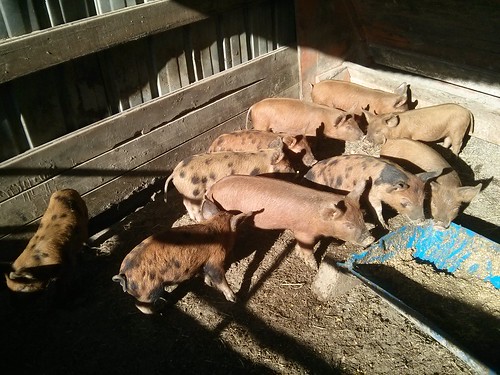 I thought I’d take the opportunity to explain a bit of what we currently do to process our piglets in their first few months of life here on the farm.

For the first 72 hours of their lives, the piglets are left alone with their mother in a pen inside the barn.  We’ve discovered that the less we interfere, the better things go for everyone.  I’m thinking real hard about moving the farrowings out of the barn if at all possible next year.  The barn remains a fairly high-traffic area, and the sows can get a bit riled-up when too many people or (especially) dogs are moving through the barn in those first few days.

Anyway, the first bit of necessary trauma in the piglets lives comes during their third day.  That’s the day that we do the bulk of the piglet processing.  We first remove the sow, leading her away to a separate pen to be fed.  The piglets are then “ranked” by physical appearance (gilts first, then boars) and given a corresponding number.  A litter of ten piglets would be numbers 1-10.

The piglets are then ear-notched and weighed. The ear-notching is a permanent ID for each pig.  One ear is the litter number, the other is the pig’s number within the litter.  This notching will never wear off or fade away, which is a big benefit with pigs who can quickly manage to tear-out or wear off most other kinds of ear tags.

I also record the number of teats on each piglet.  While you may have heard the saying “As useless as tits on a boar.” the number of teats on any pig (boars included) is actually pretty important.  Teat numbers are very heritable [PDF], and directly correlated to litter size or fecundity.  If we want to keep any piglets as breeding stock when they get older we’re going to want the pigs with the most even-numbered teats possible.  Odd numbered teats usually mean that 1-3 of those teats aren’t really going to do their job, so they’re to be avoided.

The last bit of trauma on day three is limited to the boars of the litter.  This is the point at which we turn them from boars into barrows.

That’s right, they get the ‘ol snip-snip.

So after 15 minutes of trauma, we’ve got one subjective and two objective assessments of each piglet, plus they’re all permanently ID’d and (if necessary) emasculated.

The piglets are then reunited with their mother and put out in a paddock with any other lactating sows who’s litters are within a week’s age.  The piglets then get to lead a pretty drama-free life for the next 57 days.

At 60 days we do the next bit of piglet processing.

We typically “catch” the piglets while they’re eating in a creep-feeding area away from their sow.  After a good physical barrier is in place between the piglets and sow, we get to work grabbing piglets.  At this point the piglets are significantly harder to catch.  They weigh between 18-50lbs. and they really don’t want anything to do with people (unless those people are offering food).  The piglets are caught, weighed and they all get a new nose piercing. 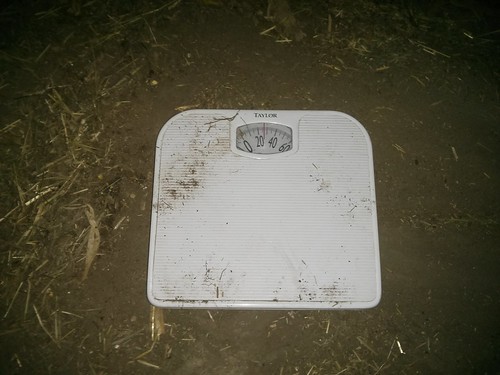 At 60 days the piglets are usually too heavy for us to use our tabletop scale.  We use the tabletop scale at 3 days, but it maxes out at 40lbs, so I have to “borrow” my wife’s bathroom scale for the second piglet weigh-in.  You may notice that the scale is quite a bit off in it’s calibration.  I intentionally set it so that when I step on the scale (without a piglet) it shows an even 200lbs.  When I grab a piglet, anything over 200lbs is the weight of the piglet. 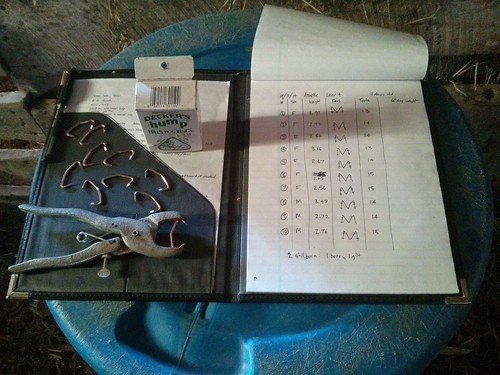 The piglets all get a ring in their nose through the septum. The ring keeps the pigs from rooting up our pastures too much.  With a ring through their septum, the pigs can still root but it does limit the really deep rooting that they tend to do.

After weighing and ringing the piglets are then weaned.  This is the point at which they are separated from their mothers and begin their lives as feeder pigs.

I’ve been thinking about keeping a gilt from one of the last two litters to replace one of our Large Black sows who was sent to the butcher shop.  I have two good candidates.

Do I choose the fast grower or the good mother?