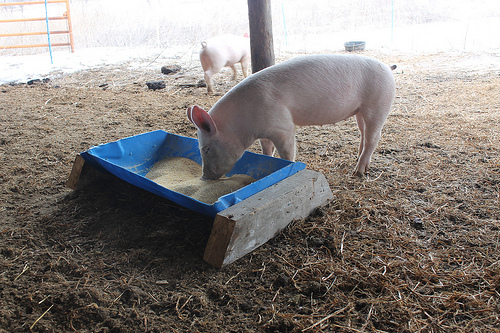 According to my recent guesstimate (using the Walter Jefferies string-method) the pigs have about doubled their weight during their two months on the farm.  The big barrow and gilt are both around 115lbs.  The little guy is smaller, but he had to fight off an infection, so he’s lagging a bit behind.

So they’re growing, which is good.  But they’re outgrowing their feed bowls, which is bad. They tend to fight over space at the bowl now, and when they get really testy, one of them will just flip the bowl over. That gives them more room to eat, but wastes feed by spreading it all over the ground. A new feed trough is in order.

I needed something that’s big enough for all 3 pigs, fairly indestructible, and hard to flip. Oh, and cheap too.

Good thing I have more of those free 50 gallon plastic barrels. Lacking a compass or protractor, I used this method.

Step 2: Chop it all up with your handy-dandy reciprocating saw (or whatever tool you want).

Why not halves? Well, halves seemed to be a bit too tall. Pigs may get big, but they don’t get very tall, so they have a hard time eating if they have to stick their heads over the 11″ side of a half-barrel. The pigs waterer is actually a half-barrel, but it’s dug down into the ground so that there’s only a 6″ lip sticking up.

So, on to step 3: Cut and attach the legs. You’ll want something heavy. I used an old 4×6 that used to be in the chickens room. Two 24″ chunks of wood ought to do the trick.

**See the updated 2015 model with one important change** Fasten with a handful of screws, trim the pointy bits of barrel with a saw, and you’re good to go.

It turned out to be just about the perfect height. The pigs were a bit disappointed that they could no longer stand in their food while they ate. The slick concave floor of the barrel leads to some slip-sliding pigs. The gilt was perfectly happy to eat from the new trough.

The boys, on the other hand, preferred to horse around in the snow and mud, as boys often do. Then the big fella (I call him Hammie) figured out that the barrel smelled DELICIOUS!!
It used to hold annatto food coloring, which smells fairly sweet. Apparently it’s an irresistible aroma if you’re of the porcine persuasion. This is not unique to the barrel though, pigs chew on everything: my boots, fence posts and even (hot) electric fence wire, hence the “indestructible” requirement.

Despite his best efforts, Hammie was unable to flip the new trough over. I’m sure he will at some point, but at least it’s not going to be an everyday occurrence.

While I was watching them eat from the new trough, the sorry state of the pigs hay caught my attention. That’s the hay, in the messy heap in the background. Sure would be nice to get that hay off the ground. It would keep it dry and keep much of it from being wasted.

If only I had a small piece of a cattle panel. Say about 4 feet long? Cut to size with bolt cutters, bend the ends over 30° or so.

Attach to a convenient wall with a few fence staples and a bit of wire. So at the end of the day the pigs are all set up with new stuff and I didn’t spend a dime. Awesome.