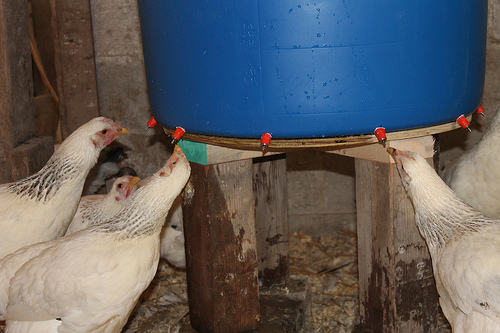 So I’ve had the Chicken Mega-Waterer up and running for the past two weeks, and as I feared, a problem arose.

It turns out that with the nipple-waters at a 90° angle, there isn’t enough water pressure to keep the nipple “shut” when the water level gets low.  I filled the barrel up with about 40 gallons of water, and everything went great.  That is, until the water level dropped to 15 gallons.

With 15 gallons in the barrel there just isn’t enough water pressure to shut the valves after the chickens peck them open.  That means that once you dip below 15 gallons, the rest of the water leaks out from every nipple ’til there’s nothing left.  Water everywhere.  Not good.

So, say hi to the chicken mega-waterer v1.2. Starting with a fresh barrel (don’t worry Tim, the old one is getting recycled into a feed-barrel).
The only difference is that I put the nipples in at a 45° angle around the bottom edge of the barrel. Same measurements, same hole size, pipe dope, easy. The only problem is that you have to make a special stand to put the barrel on so that all the nipples are accessable. It’s not too hard, just a 21″ circle cut out of some 1/2″ pressure-treated plywood, resting on top of some 4″x4″ legs to get it up to chicken height. The chickens were happy to have their mega-waterer back, and it didn’t leak at all, even with only 5 gallons in the barrel.  At a 45° angle, the nipples have the weight of the internal rod/valve and all the water pressure to keep them closed.  Much better.

UPDATE: see Chicken Mega-Waterer v1.3 for the most recent version.