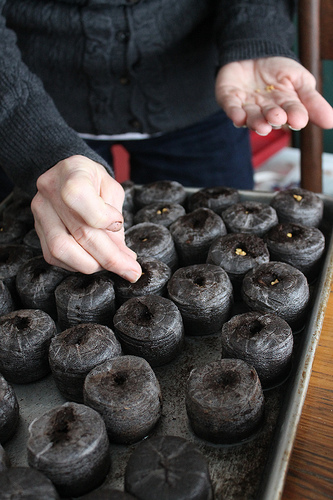 I have no idea how this new climate zone is going to work out in Minnesota.  We’d pretty much figured Missouri out, and then we went and moved up here to Zone 4b.

From our roadtrips up here last year, we figured that the weather is a full month behind in the spring & summer.  Since we’d normally start our seeds in mid January in Missouri, I figure that mid-February ought to be about right for Minnesota. So out come the seed trays, peat discs and boxes of seed. I even had a helper, as my mom (heretofore referred to as Big Cathy) was up to visit.

We mainly started our hot-weather plants, tomatoes and peppers, with a few brassicas thrown in for good measure.  We’re not really focusing on growing vegetables for market, we’re just trying to keep ourselves fed.  If most of what we started germinates then we’ll be in big trouble. We’ve got 1 tray of Cal-Wonder bell peppers, 1 tray of Amish paste tomatoes, 1.5 trays of Cherokee purple tomatoes, and 0.5 tray of a few other tomato varieties.  Figure 50-60 starts per tray, and we run the risk of being overrun by tomatoes if all goes well.
If we have too many extra tomatoes we can sell them, though I hate to take them to a farmers market. It seems that every summer there is a glut of tomatoes at the farmers markets, to the extent that the farmers who rely on vegetable production for their income really can’t make any money off of tomatoes.  Often there are a lot of “weekend warrior” veggie growers (which could include us) who are selling off their excess at below the actual cost of production.  Hard to compete with that.

Maybe we’ll just sell them from the farm store, or just sell the ugly ones as canners.
And in the worst case, I’m sure the pigs would love to dispose of some tomatoes.

Anyhow, back to seeds, we haven’t had much luck germinating pepper seeds in the past. Peppers especially need to be warm when they’re germinating. I’ve been wanting to make a heated seed-starting mat, but haven’t got around to it.

But I came up with a pretty good spot to germinate the seeds anyway. The tomatoes and peppers are all hanging out by the windows above the living room. We keep the woodstove going during the day, keeping it at a toasty 80°F or so.
I doubt they built the shelves for starting seeds, but it’s about perfect for that purpose.

Now it’s just a small matter of getting the garden ready. Just a bunch of tilling, hoeing, amending the soil…
And figuring out what to do with all the greenhouse film that the UPS guy is going to be delivering in a few days.