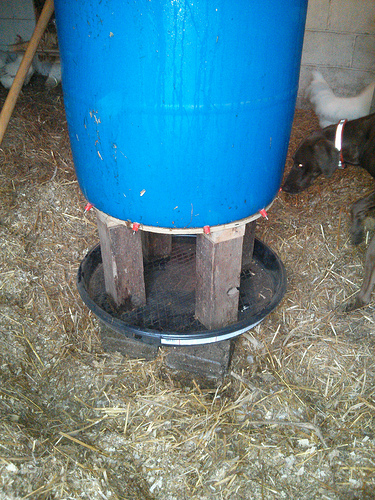 Ok, so this is a pretty minor update, no major overhauls or anything.

Even with the adjustments that I did last time with the Mega-waterer, we still had a problem with excess moisture making it’s way into the bedding. It’s not that the nipples were leaking, but the chickens weren’t the most efficient drinkers.  The chickens peck at the nipple to release water.  Unfortunately, they don’t drink every drop that they release, and a few drops end up falling down into the bedding.

A few drops isn’t a big deal, but multiply those few drops by 50 chickens drinking several times per day, and you end up with enough water to cause a problem. Ideally I could just get smarter chickens that would figure out how to drink more efficiently, but chickens aren’t exactly known for their mental prowess.

If only I could come up with some sort of pan to catch the drips that’s slightly larger than the (21″ diameter) barrel. Despite the best efforts of a flock of ornery chickens, the bedding remains dry, the drain pan stays just damp.

Oh, and having just been through one of the longest Minnesota winters on record, I’m happy to report that the Mega-waterer (in all it’s iterations) performed admirably in below-freezing temperatures.  Throw a stock-tank heater in there and nary a single frozen nipple was witnessed all winter long.