You may have read about it in the news, but we’re living right in the middle of it (well, almost) here in Southeastern Minnesota.  Several counties about 2 hours NW of us were the early epicenters of this particular H5N2 outbreak in our state’s numerous commercial turkey flocks.  We’ve also seen outbreaks to the East in Wisconsin’s commercial broiler flocks and to the South in Iowa’s commercial laying flocks.

What we’ve yet to see is a single outbreak in “backyard” or alternative (read: pasture-based) poultry flocks.  This is in spite of the fact that these free-ranging flocks should be MUCH more likely to come into contact with the virus through contact with the outdoors generally, and wild birds more specifically.

Wild birds, especially waterfowl, are the alleged carriers of this particular strain of bird flu.  We’re in the midst of the spring migration here in the Mississippi flyway, which means we’re up to our eyeballs in wild birds and waterfowl right now.  With all these wild birds acting as disease vectors, the USDA’s guidance is pretty simple: keep your poultry locked up indoors and keep all the germs outdoors.

Try as they might, the commercial poultry farmers seem unable to stop the virus from infiltrating their barns.  We’ve already lost 8% of Minnesota’s turkey flock to the outbreak and 17% of Iowa’s laying flock.

So if the virus is getting into highly bio-secure poultry barns, we can safely assume that it’s probably getting into wide-open backyard and pastured poultry flocks like ours.
The big question is, why is the virus killing off confinement poultry and not ours?

I was mulling over all these questions on Saturday morning, when I walked out of my house to find this lying on my patio. 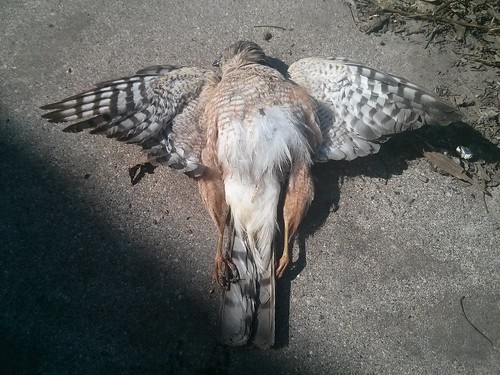 Cue panicking about the Minnesota Department of Ag showing up to liquidate our laying flock….

After calling in to report said cooper’s hawk to the MDC, we breathed a big sigh of relief.  They didn’t want to take the bird in for testing, it had likely been dead too long.  Apparently they have to be pretty fresh to still carry the virus.

Here it is several days later, and our chickens are still healthy.