Yep, the USDA showed us at a moderate drought level last week.

On Friday, however, we got upgraded to Severe drought. 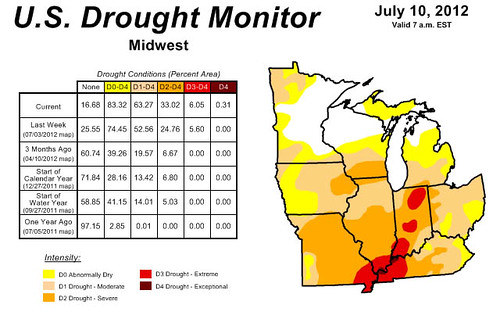 The pastures are dry, if not downright crispy. The fescue has long gone dormant because of the heat. There isn’t a whole lot of forage out there to speak of. At least we aren’t row croppers. All of the corn around here looks dismal.  So bad, in fact that the Governor just declared almost the entire state an agricultural disaster area.

It’s already too late for the corn crop, it’s history.  The beans could be saved if we were to get some decent rain in the next few weeks, but that isn’t looking likely.  After a week of relief from over-100-degree temperatures, it looks like we’re headed back into the 100’s for a while.

On the bright side, the NRCS (the government entity that oversees the CRP program) has released land enrolled in CRP to be grazed or cut for hay because of the severe drought.  Normally you can’t graze or cut CRP fields but once every three years, and then you are allowed to graze/cut after July 15th.  For the privilege of grazing or haying your CRP payment is reduced.

We have 40 acres that was recently enrolled in the CRP program.  When it was enrolled, it was planted in a mixture of alfalfa, red clover, white clover, lespediza, timothy, orchard grass, and several other species that I can’t remember off the top of my head.  In short, it looks like excellent pasture.  Since it was only recently enrolled we wouldn’t be able to graze it for another few years, but due to the drought, we can (and will) graze it this year.

Hopefully we’ll get some rain in time to stockpile some fescue this fall for our winter grazing.  If not, it’s going to get mighty interesting around here.

In other news, I haven’t been able to blog a whole lot on account of all the stuff going on.  We’ve just moved out of our house and into the basement of my in-laws for a few months before we depart for Minnesota. We picked a lovely 107 degree day to do the moving too!

We’re all moved in, but still living out of boxes and getting used to the rural-limited-internet-access thing.

We’re also less than a month away from Callina’s due date.

Oh, and if you’re real lucky I just might have another dispatch from Minnesota for ya this weekend…