All the way back in January, it seemed to strain credulity to believe that we could sell 3 entire pigs. 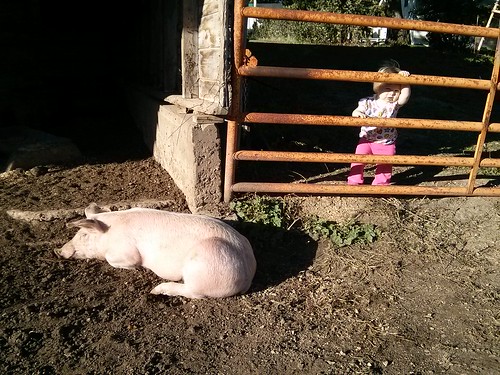 How quickly that all changed.

We spent the vast majority of the year explaining to potential customers that we were sold out of pork.  We weren’t helped out by our hunt for a good butcher, which took an early wrong turn, leaving us with 2 pigs we were unable to sell at retail.  It’s a good problem to have, but it’s still frustrating to be short of pork for so much of the time.

For our first year having pigs on the farm, we’ve so far sold 7 pigs, with an additional 5 more finishers that will be ready to go this winter. 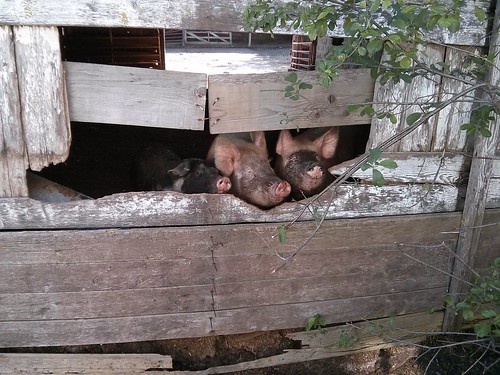 As a pig-raising novice, I had to rely a lot on buying feeder pigs this year.  A feeder pig is a young pig, weaned from it’s mother, that is bought for the purpose of feeding or “fattening up” to it’s market weight.  If you have no time or money for breeding stock (like me at the beginning of the year) then you buy feeder pigs.  Feeder pigs are a lot easier to manage, but they put you at the mercy of other producers who may not be farming up to our standards.  Around here, you can safely assume that all feeder pigs are from confinement hog farms unless you’re presented with evidence to the contrary.   I don’t like the idea of supporting confinement farms, so using feeder pigs had to be a temporary measure.  We’re very glad to be moving away from feeder pigs going into next year.

2013 saw the beginnings of the breeding swineherd here at Green Machine Farm. We now have 4 breeding gilts and one boar. I knew I wanted to raise some rare pig breeds, but not knowing exactly which one, I decided a scatter-shot approach would be best.  We have two Large Black Hogs, one Gloucestershire Old Spots and one Tamworth.  The 5th breeding pig was a particularly good-looking feeder pig (a spotted poland china) that was too good of a pig to butcher.

Before we got our little boar pig, we borrowed a boar from a friend.  The piglets from that pairing will be coming along at the end of January, providing much of the pork that we’ll sell next summer.  It’ll be a while yet, but I’m pretty anxious to try our first heritage-breed pork.

Overall, I love having pigs around.  They’ve been a lot of fun to interact with, much smarter and more sociable than a cow, but all those smarts can lead to some interesting problems.  For example, just a few weeks ago the pigs figured out that the turkey feeders were nothing more than large metal corn-filled pinatas.  Fortunately, a single electric wire can cure pigs of most of their bad habits, rendering the turkey feeders untouchable.

The pigs were a huge help this year in clearing out all the weeds and brush around the farmstead. In it’s near decade of abandonment, the land around and between the farm buildings had grown up in a nearly inpenetrable array of Burdock, Thistle and Buckthorn.  All invasive weeds (or trees) and all quite a pain in the butt to remove. 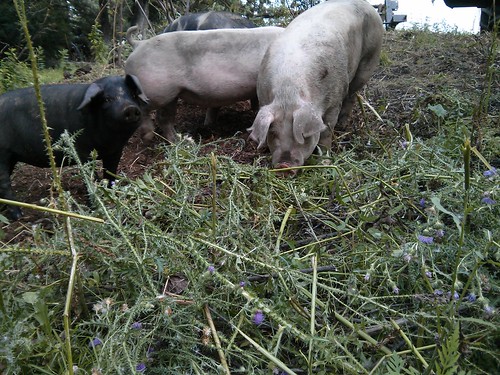 A pain in the butt to remove unless you have a nose that is more like a plow.  Then it’s apparently no problem at all.

I’m heading into next year with enough pigs (potentially 56) that I feel pretty nervous about how I’ll get all of them sold.  I would love to sell more pigs by the half and whole hog next year.  Selling halves and wholes is a lot easier for us, a lot cheaper for our customers, and more sustainable all around. This year, I put exactly zero effort into selling halves and wholes, and selling 2 pigs that way and turning away many other potential customers.
Next year, our pigs will go towards maintaining a steady supply of pork for our retail customers (farmers markets), growing our half and whole-hog customers, and selling any surplus pigs as feeder pigs.  In the worst case scenario we’re only 1.5 miles from one of the biggest salebarns in this part of the country, so we could sell extras at the feeder pig or market hog auctions.

Tags: Pigs, State of the Farm
By Andrew