Warning, this blog post is about a necropsy of a deceased piglet, which includes pictures.

If this sort of thing makes you squeamish, you might want to find something else to read for a bit.

So, one of the sows that I recently culled had two runts in her last litter.

After being weaned the runts, especially the smallest one, never did very well.  Despite having constant access to food and water like the other pigs, he seemed to be losing weight.  As the weeks went by he became emaciated and we put him in a pen inside the barn by himself.  It didn’t help.

We wormed him, fed him extra, and even took the drastic step of giving him a course of antibiotics.  None of it helped.

Finally, he was on deaths door, and the only humane thing left to do was euthanize.  I decided that a necropsy was in order to access what was wrong with the piglet. 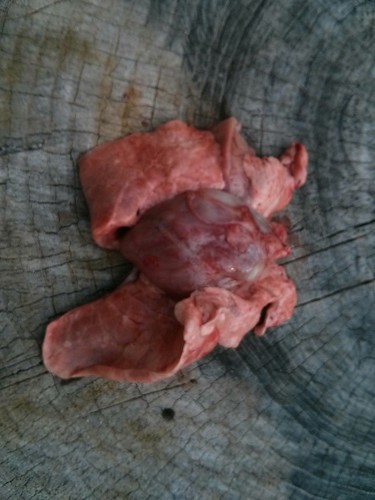 Heart and lungs were fine. The heart may be a bit enlarged, but nothing too out of the ordinary. 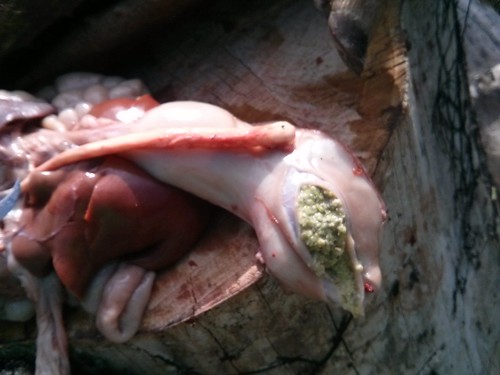 Down in the digestive tract is where things got interesting. The stomach was full of feed. That’s a bit odd for an animal that practically starved to death. The intestines, on the other hand, were mostly empty, save for a few bits of feed and bubbles of gas. 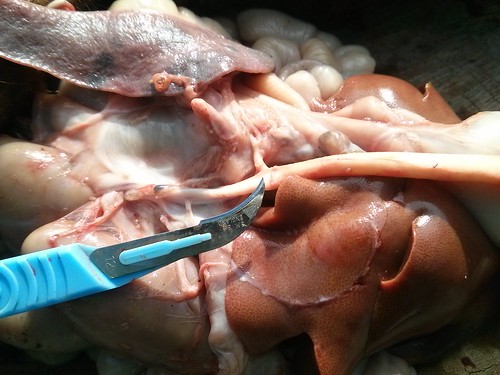 Liver looks good (near the scalpel blade), which likely means there wasn’t a parasite problem. The spleen (upper left) had some dark mottling on it, I can’t figure out what that might mean. 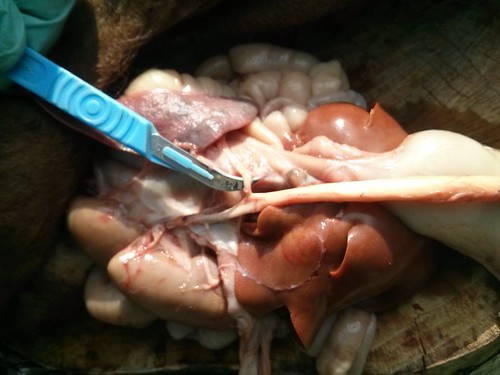 It was after tracing the route of the esophagus what I uncovered the problem. On this particular piglet, the esophagus went on a direct path from mouth to rectum. There was a tiny fork in the esophagus (being held up by the scalpel blade) about halfway through that lead to the stomach.

Poor little guy wasn’t plumbed right, he never had a chance.
So while this is all a bit sad, it does give me two things to be happy about.
First, it was not poor management that lead to this piglets untimely demise.
Second, I’ve already eliminated the offending genetics (his dam) from the herd.