It’s been almost a week since we picked up our first chicks of 2015. 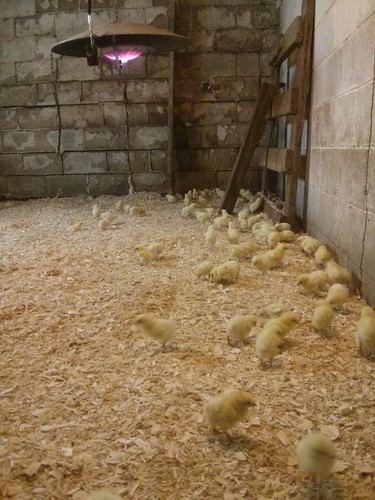 They’re pretty cute for the first two weeks or so, then the cuteness drops off pretty fast.  But right now we’re still in high-cuteness territory, our daughter demands to go see the chicks multiple times per day.

I’ve been pretty ambivalent about meat birds this year.  This is partially because last year was such a disaster for meat chickens.  We were not alone in our bad luck, as I talked to a number of other farmers in our area, and every one of them had bad luck with their meat chickens as well.  I’m chalking it up to the unusually long, cold, wet spring.  Chicks (especially in the first two weeks of life) like it hot and dry, something we had precious little of last year.  With 90°F in the forecast tomorrow, the chicks are having a fine time, which is reflected in the mortality numbers (only 2 so far).

Last year we purchased this gas brooder for our last batch of chicks, thinking that our electric brooders were the cause of our high mortality, but much to our dismay the gas brooder didn’t help.

I think it was just a matter of working the kinks out. We got a 100# propane cylinder and a two-stage regulator, replaced the thermocouple and it seems to be working just fine.  Just to be safe, we thoroughly cleaned and disinfected the brooder room before the chicks arrival.

In another week or so it’ll be time to start repairing the chicken pens for another year of service.  The calves got a little too friendly with some of the chicken pens over the winter and mostly destroyed one or two of them.  I think it may be time to move to a stronger (but more costly) sheathing than the recycled campaign signs that we’ve been using.