In the perennial battle against invasive biennial weeds, I’ve been doing a little bit of experimenting.

After last year’s failed attempts at some well-timed cutting, first with the brush-hog (until it hit a rock and broke) and then with a scythe, it was time to find a different solution.

I’d heard good things about the parsnip predator, a specially-designed shovel that’s used to sever the taproot of wild parsnip and other biennial weeds.  All the reviews sounded good but $50-60 is an awful lot to pay for a cheap shovel.

I cleared a bit of thistle and burdock with my 6″ grubbing hoe and my Fiskars post-hole shovel.  Both worked OK, but they were far from ideal.  The grubbing hoe is too wide and too hard to aim. The Fiskars is too heavy (which makes it a great post-hole shovel) and the rounded nose wasn’t helping much, even when kept very sharp.

So I moseyed on down to the hardware store and bought the cheapest light-weight post-hole shovel I could find. 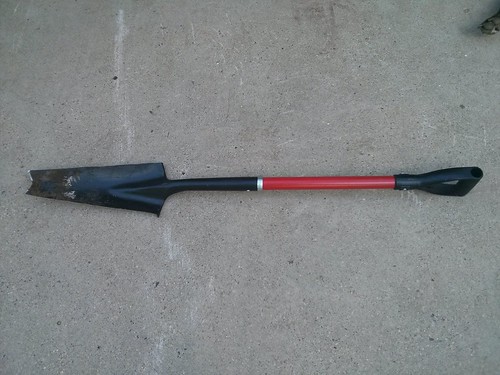 I chopped an inch off each side at the bottom of the shovel (tapering to full-width at the top) and cut a V-notch in the nose.  I drilled out the handle-rivet, rotated the handle 90° and re-attached it with a machine-screw and bolt. After a bit of grinding and hand-filing to get it nice and sharp it was off to the pasture to see how it worked. 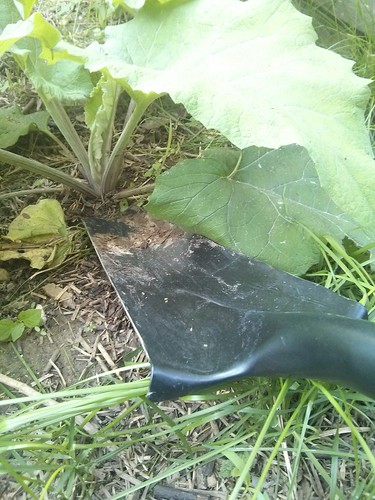 Follow the stem of the plant down to ground level, back the blade off just a bit, then push down at an angle to slice through the taproot. 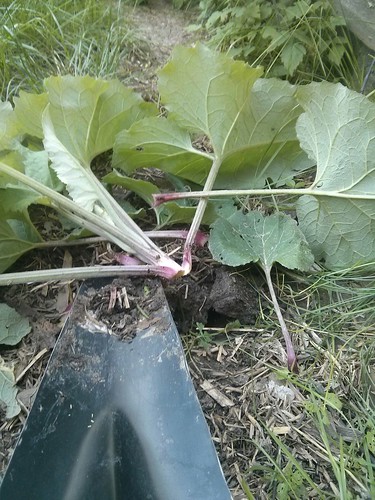 With a quick flick of the wrist you can pop the plant right out of the ground, leaving very little disturbed soil.  It’s amazing that just a few small changes can make such a huge difference in the speed at which you can kill weeds.  This tool can make mincemeat out of even a very large thistle (or burdock, or parsnip) in one second.  The small sharp blade is easy to push through the taproot with one hand, and the V-notch makes it possible to get centered on the stem without seeing the base of the plant.

I wish I’d have made one of these a long time ago.

Tags: DIY, How-To, Things that are Awesome, weeds
By Andrew