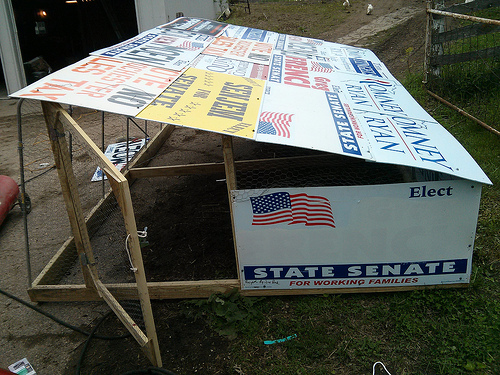 So I made some pastured poultry pens last year, and they worked out pretty well, even though we had trouble with the recycled tarp that we used to cover it.

But something was bugging me.  The cattle panels we used to build the pens were too heavy, and too expensive.  There just had to be a better way… The main structure of the shelter is made from 1/2″ EMT conduit.  The highest (front) side is about 4′ tall, and the rear side is 2′ tall.  Conduit is very lightweight, cheap and rigid.  It’s pretty much the perfect material for making these pens. With one stick of conduit connecting all the “ribs” at the top, and one diagonal brace connecting the three center “ribs” the structure is quite stiff, even without all the coroplast installed.

I added two brace wires to the interior, which stiffen the base and keep it from squashing itself into any non-square shapes as it’s being pulled around the pasture. Speaking of pulling around the pasture…

Both brace wires are anchored to this nice big eye screw, which is a handy place to hook on to drag the pen around. The pen is, of course, clad in what may be one of the more unusual looking materials: free coroplast.

Coroplast is tough, waterproof, rigid and have I mentioned free? And I always make sure to put a good door on my pens. If you’re going to be getting in-and-out of a pen several times each day, then it’s worth the expense to put a latch and hinges on the door. It takes a bit longer to build, but if it saves you 15 seconds each day, then it will save you 90 minutes in the first year you use it. On the inside, I make a “sweep” of scrap chicken wire to close the gap below the 2×4 crossmembers. This keeps predators out, while making the pens easy to drag around the pasture. Also, reduces the chance of a chicken being hurt if they are straggling behind while the pen is being moved. The chickens were moved out on pasture today, and so far, they’re loving their new home! (Not counted: nails, screws, latch and chicken wire. Because I already had all that stuff lying around.)