The girls are getting very nearly _ months old at this point and it’s safe to say they’ve grown a bit. They doubled their weight in the first month on the farm, and they’ve probably doubled again since then. 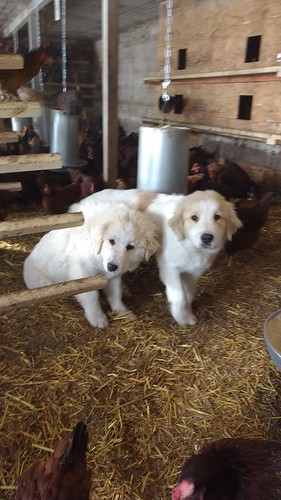 Anna (on the left) is the by far the bigger of the two, and the most outgoing around people.  Elsa, the more svelte sister is the more aggressive player.   They’re both remarkably laid-back dogs.  This observation can be taken with a grain of salt as all my previous dogs have been extremely high-energy breeds (Airedale, German Shorthaired Pointer, Viszla, Australian Cattle Dog). I’ve been delighted to find out that both Anna & Elsa have been remarkably easy to train.  I’ve read that LGD’s (Great Pyrenees included) can be stubborn, but these two live to please.

There appear to be two camps when it comes to training LGD’s.  The old-school “leave them alone” camp and the newer “interact with them like any other dog” camp.   We pretty quickly fell into the new-school ways, as it is pretty impossible for a bunch of dog-lovers to not interact with two little 10 pound balls of white fluff.  It’s been hard enough (for some of us) to not let them in the house.

In their first few months the girls needed a bit of supervision around the chickens.  They managed to discover that chickens are wonderful playthings that become even better snacks if played with long enough.  After that they only got to roam free when the chickens were cooped up for the night.  After a few weeks of accompanying me on my daily chores in the chicken coop they began to earn their privileges back.

These days Anna & Elsa get to roam free almost all the time. They’re segregated from the chickens at night, the chickens getting locked in the coop and the dogs settling into their doghouse.  They’re beginning to take patrols of “their” territory at dawn & dusk and working hard on their grown-up barks. Fourty pounds of dog with eighty pounds of voice. 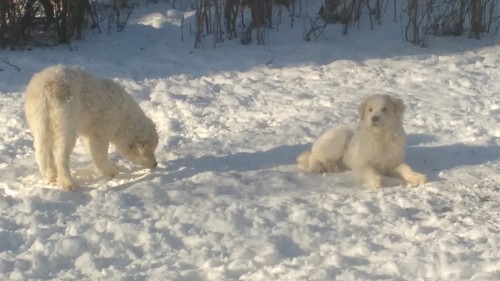 And how are they taking the frigid Minnesota winter in their doghouse? Well, this is them on the coldest morning so far (-19°F) out rolling in the snow. All that fur is good for something.