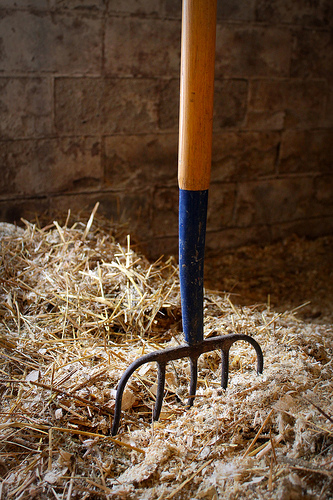 It’s now been three and a half months since we got our first batch of chickens for the new farm.  They’ve been indoor chickens for the whole time, not because we intend to confine them indoors, but because it’s just too darn cold outside for young chickens to handle.

The NASCAR broiler chickens can handle freezing temperatures at only 4 weeks old.  But the slower growing egg-laying breeds just don’t have the supercharged metabolism to handle freezing temperatures at that age.  Heck, anything less than a fully-mature layer will have trouble handling a sub-zero Minnesota winter without some serious shelter from the elements, or even heat lamps when it gets seriously cold.

In the winter, our chickens live indoors.  Right now they’re in the barn, but the goal is to get them moved to the chicken coop later this year, hopefully in the spring when we’ll need to start brooding the first batch of broilers for the year.

Keeping chickens indoors is not without it’s problems though.  The main problem is poop. Chickens don’t just hold it until they’re let outside, so lots of poop builds up in the coop.  To deal with the poop, you’ve traditionally got two options:  clean it out regularly, or let it build up.

Cleaning it out regularly is a lot of work.

Letting it build up is a smelly mess.

Deep litter is the practice of building up layer-upon-layer of litter and manure.  It’s not as smelly as just letting manure alone build up because you’re adding in an absorbent carbon layer (litter) on a regular basis, which absorbs moisture and eliminates most if not all odors.  Most of the time you’re only adding litter on top of the existing soiled litter, so it’s easier than shoveling the whole mess out every time.

Deep litter works a lot like compost when it’s done properly.  You’re shooting for a nice carbon-nitrogen mix that will cook down to a lovely-looking dark humus when it’s done.

I’ve been building up the current deep-litter since I got the chickens in mid-October.  I add a new layer of bedding material (either straw or woodchips) whenever I begin to notice that distinctive ammonia odor that built-up manure gets.  It looks like an amalgamated mess of woodchips, poop and feathers. About 4″ of litter has built up in the 3 months that the chickens have been in the barn.  It’s hard to believe that 5 bales of straw and 7 bales of wood shavings can pack down into such a small area. Every once in a while, when it gets this densely packed, it’s good to mix it all up, to add some air to help the aerobic bacteria break down the litter. No getting around this part, it’s work. Just grab your trusty pitchfork and get scooping. Once the litter is all mixed and fluffed-up, it adds quite a bit of volume. At least 50% more volume, so that 4″ deep litter just turned into 6″ of litter. To keep it from being all dragged out the door I put a 6″x6″ board in front of the door to keep it in. After it’s all mixed up, add on a new layer of fresh bedding. Wood chips are by far my favorite bedding, as they are very absorbent and sold at most every farm store and co-op. I will occasionally use straw if I have some laying around. Straw is cheaper but it isn’t nearly as absorbent, so it’s prone to matting. Once the new bedding is down, the chickens attack. They love scratching around in the new litter. I’d like to get them used to eating some scratch grains, so I can just throw some scratch grains into the litter the next time I want it mixed up. Layers will scratch up litter like their life depends on it if there’s a tasty treat involved. With the old bedding fluffed-up and covered by a fresh layer of wood shavings there is no trace of a chicken manure odor. It actually smells pleasantly like pine (from the wood shavings) and will stay pleasant (or at least neutral) smelling for at least another two weeks. At that point, just add a new layer of bedding and you’re good to go for another few weeks.