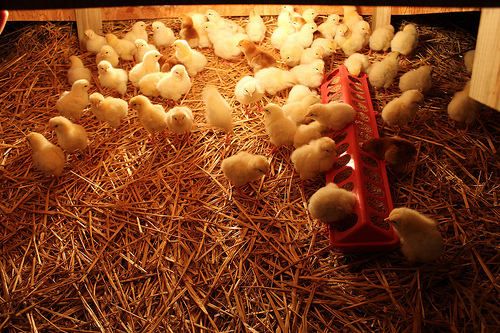 The Zumbrota Postmaster gave me a 7am wake-up call on Thursday morning, letting me know that she had a very loud box at the post office with my name on it. 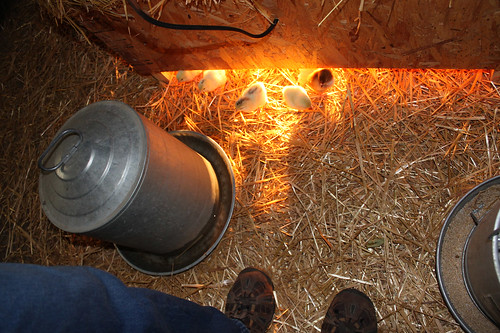 My box from the hatchery had arrived with the farms first livestock inside: 50 Delaware Pullets, 6 Rhode Island Red Roosters, 6 White Rock Roosters.

Earlier in the Summer I ran into a few problems with the first iteration of our home-grown broilers.  The Dark Cornish x Orpington crosses were too dark and the pullets didn’t get big enough to make good broilers.  I’ve been thinking of using Delawares for a while now, having stumbled upon this article about Cornish x Delaware Broilers last year.   The method in the article isn’t what I’ll be doing, as they seem to describe using normal Cornish x Rock Broilers to breed with their Delawares, but at least they’re having some success with the Delaware genetics. 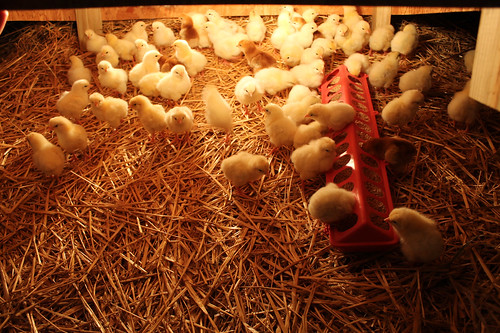 For me Delawares seem to be the best choice for breeding both layers and broilers.
Delawares are said to lay very well and they have just a bit of the “barring” from their Barred Rock ancestors. This means that if I cross them to a Rhode Island Red rooster, the offspring will be sex-linked (red female chicks, white/barred male chicks) which should be helpful when trying to hatch my own laying flock.  Bonus points for Delawares and RIR’s both being excellent layers.

For breeding broilers, the Delawares have a history of being used for meat production.  Before the Cornish X Rock took over the broiler market, Delawares were commonly used to cross with New Hampshire’s for broiler chicks (Indian Rivers).   My big problem is what do I breed them with?  Dark Cornish are out because their dark feathering will carry over into the chicks, and while they do have large breast muscles, they don’t get big enough to make reasonable broilers (at least for the pullets).  Unfortunately, the big four companies that control the broiler market don’t make it easy to get ahold of  the larger, white production-Cornish birds that they use as the base for their Cornish-Rock cross.

The Rock half of that equation is a bit easier to come by though.  White Rock are still easy to come by, and they are noted for their rapid growth.  We’ll see how they do crossed with the Delawares, I’m sort of nervous about coming out with a “razor-breasted” bird without the Cornish influence, but time will tell.  If it becomes an issue I still have 3 Cornish x Orpington hens that I should be able to get some white chicks out of…