As this is the first year that we’re breeding our own meat chickens, I opted to get a few commercial “cornish cross” meat chickens to raise alongside them in order to see the difference in growth rate, activity level, carcass characteristics, etc.

I just got my shipment of commercial meat birds yesterday. 25 cornish cross, and 4 turkey poults.  Already, the differences are pretty huge.  I put them in the same brooder setup that I used with the 28 or so “homegrown” cornish cross chicks that I hatched out a few months back.  It’s amazing to see the little commercial “NASCAR” chickens eat (and drink) 2-3 times more than their “heritage” cornish-cross counterparts. 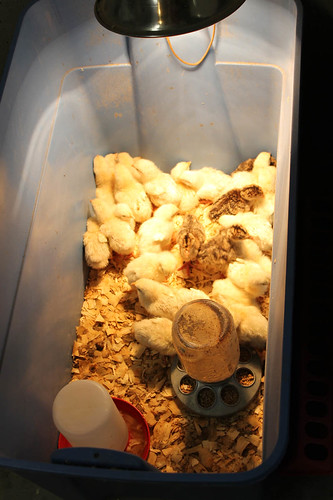 They actually drank so much as to cause a problem.  Turns out that what goes in one end, well, it comes out the other.  And they’re putting down so much water that their now watery poop soaked through the newspaper that was in the bottom of the brooder overnight.

I woke up this morning to find one particularly runty chick nearly dead.  It had been trampled to the ground by it’s bigger brethren and the now-soaked newspaper got the little bird thoroughly wet and ice-cold. 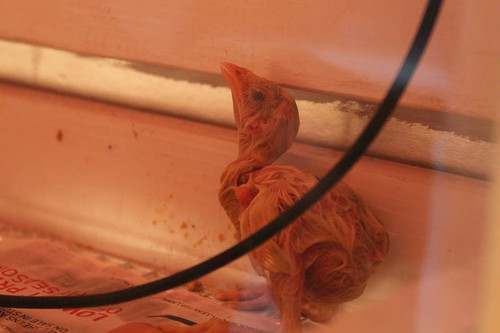 If it doesn’t start drinking and eating on it’s own by tomorrow I’m afraid it’s toast.