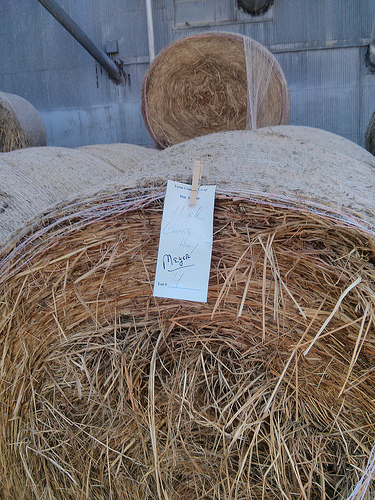 Well, it’s finally decided to be spring here in Minnesota. It hit 79° here today, a darn sight better than the snow we got just a few days ago.

Anyhow there was also another hay auction this Saturday, and much like the weather, the results were much improved. Apparently word got out that hay prices went sky-high last time, so anybody with any hay sitting around made darn sure to truck it over to the co-op and get in on the last auction of the season. Last time there were around 40 lots for sale, this time there were just over 100.

What a difference some high prices can make.

Anyway, we’ve been buying some hay from a local guy, and paying $230/ton for it. It’s higher than we’d like, but the hay is really pretty nice stuff. Nicer than we need really. They’re 1600# round bales of grass/alfalfa mix, so they end up costing us about $180/bale. That’s pretty high, but then again they’re much bigger bales than almost anything else around here.

I figure that most round bales up here are around 1100#, so any round bales I buy would need to no higher than $125/bale to be a better deal than what we’d been buying. Lucky me, most round bales were going for around $125, although the first lots that I saw sell were pretty nice hay. That meant that the not-so-nice looking hay further down the line would be even cheaper…

Let me first explain that I am the grandson of one Julius H. Johnmeyer, a man who attended many auctions, and was known to bring home many unexpected (and unneeded?) things because “it went too cheap.”

This was not the best hay I’ve ever seen. It wasn’t exactly the worst either, but wasn’t about to just stand there and just let it go for $50. On down the line a bit I managed to snag 11 more round bales (better hay this time) for $95/bale. Three or four lots went for about the same price, so the dramatic shift in the weather seems to have had a dramatic effect on the bidding.

So we bought some hay, just have to go pick it all up tomorrow when the truck and trailer get here.

Oh, and I’ve got to get all these Minnesotans to figure out that my name isn’t “John Meyer” I think I’ve devised a clever strategy whereby I’ll spell out my name “Joh-nme-yer” We’ll see how it goes.