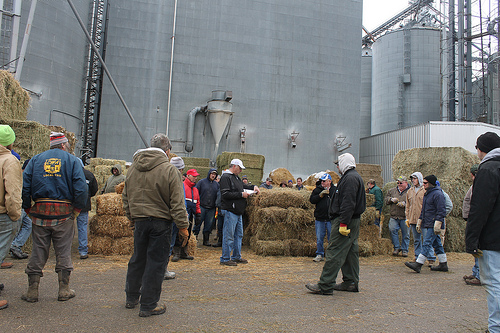 Last week the cows arrived.  The cows need something to eat, which at this time of year means hay.  We’re a bit short on hay right now, so I decided to head on over to the bi-weekly hay auction in nearby Pine Island. The auction is held at the Pine Island Co-op, and while this is the first one I’ve attended, I’ve followed the prices from past auctions. 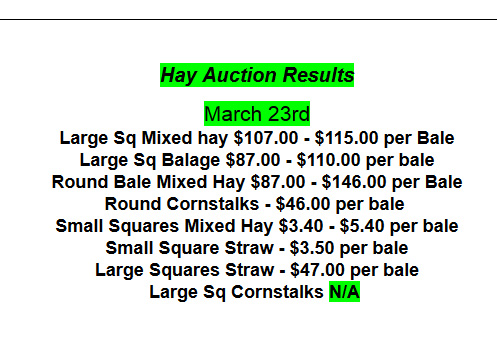 We prefer to buy and feed round bales of hay, our bale spikes and hay feeders are set up for round bales.  We can use (the more prominent) large square bales if we have to, but they’re a pain in the butt compared to rounds.

Armed with the knowledge of current hay prices on Craigslist, and the last auction prices, I showed up with an empty flatbed trailer and a determination to get something for the cows to munch on until the grass starts growing. The very first lot was 11 big round bales.  Grass hay, not terribly good looking.  I was willing to go up to $100/bale or so.  The auctioneer started out at $60/bale, but it quickly doubled, selling for about $125/bale.

OK, first one’s a fluke.  Maybe somebody knew something I didn’t, maybe it was better hay than I thought.  “The next lots will be better priced” I thought.

That would end up being the cheapest hay at the auction.

Big Square bales averaged about the same, but one lot of very nice 4th crop Alfalfa went for $195/bale!

People in the crowd shook their heads, amazed at the prices.  “But what are you gonna do?” one guy exclaimed, “Cows gotta eat.”  The unusually cool April (and March) are really hitting the livestock producers pretty hard.  Everyone seems to have been counting on having some grass to graze at this point in the spring, but instead, it’s snowing. I left the auction much like I came in, with an empty trailer.

I’ll try my luck on Craigslist.