The turkeys were the one unequivocal flop on the farm this year.  Not everything can be a rousing success the first go-round, and the turkeys certainly proved it. 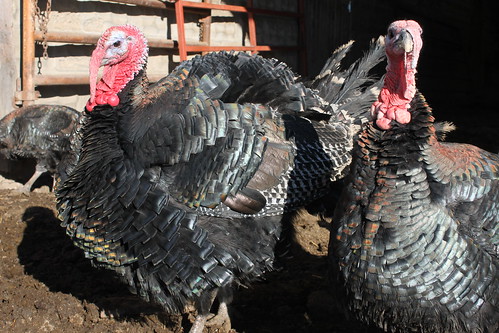 They nearly all met an untimely end, which only left us with 4 turkeys out of the 50 poults (baby turkeys) that we started with. Some quick back-of-the-napkin math told me that we ate a $250 turkey for thanksgiving (and that’s not counting any of our labor.)

Anyway, as bad as it was losing all the turkeys just before butcher day, the turkeys were losing money even before they all became dog food. We raised the turkeys in the same pasture pens that our broilers are raised in. The pasture pens make it easy to keep the turkeys safe from predators and keep them on fresh grass. But as the turkeys got bigger, problems arose. Namely, the turkeys get a lot bigger and heavier (and more active) than a chicken, so they were a lot harder on the pasture pens and other equipment than the chickens are.

I had to spend way too much time this year repairing feeders, waterers and pasture pens because the turkeys were constantly finding ways to break them all.

In addition to the increased equipment and maintenance cost to the turkeys, we have to factor in the opportunity cost of raising turkeys in the pasture pens.
If a pen has 20 turkeys in it for 6 months, then we stand to gross about $1425.00 per pen. If we were to kick the turkeys out of the pen and raise 2 batches of 75 chickens in 5 months then we would stand to gross $2010.00, just about $600 more income and one month of vacation. (Just kidding, farmers don’t get vacations!)

The last thing that we had trouble with in raising this years turkeys was mortality, and not the big obvious dog-massacre mortality. There were several occasions throughout the year when we lost 2-4 turkeys at a time to various causes. All told there were 32 turkeys that made it to butcher-weight, with 18 dying before they got big enough. You can always figure that you’re going to lose up to 10% of the birds when they’re young. We try to keep it down to 5% or less, but you can generally figure that if they make it past the chick stage (if they fledge-out to their adult plumage) then they’re very likely to survive to make butcher-weight.

Not so with the turkeys.
We only lost a couple turkeys as little poults; most of our mortality occurred as adults. A few died in a freak July cold-snap, a few died in when the wind blew their pen over on them, and the single biggest cause of adult mortality was the cattle’s water tank out in the pasture. I had to fish wayyy to many dead turkeys out of the water tank this year. The turkeys seemed to have some sort of magnetic attraction to that particular water tank, crossing as many as 3 fences to get out to it, and then promptly drowning themselves.  It was more than a bit frustrating.

For next year, we’ll probably raise a few turkeys, just not in any significant quantity.
Turkeys sure seem like a no-brainer. The quality of a pasture-raised turkey is absolutely night-and-day compared to a supermarket turkey. Couple that with the fact that most people are willing to spend a bit more on their big holiday meal and one would think that there’s quite an opportunity to sell some turkeys.  Heck, a farm near us (Ferndale Market in Cannon Falls) raises and sells thousands of turkeys every year, so there’s got to be something to this whole turkey business.
We just have to find a way to raise a few turkeys that will cost us less time & labor and be a little less risky.
I think that a free-range system (with shutting the turkeys up at night) could be a much less labor-intensive way of raising them, but we’ll have to figure out how to “train” the turkeys to go back home at night. Whichever method we end up using to raise them, we don’t want to run any experiments with thousands of dollars of turkey, so we’ll be raising small numbers (a dozen or so) until we get a better system figured out.

Tags: Fail, State of the Farm, Turkey
By Andrew