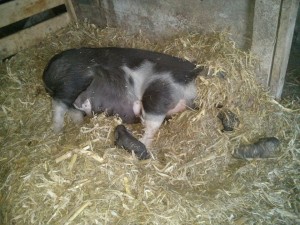 So about two weeks ago we had three pigs lined up to farrow their first litters. Hooray!

Until we realized that one of the younger pigs wasn’t looking that pregnant.  No big deal if she wasn’t, as she was quite young when she was bred (I didn’t realize that pigs could start cycling that young when we introduced a boar).  So only two pigs were gonna have babies.

I was keeping a pretty close eye on the girls in the leadup to their farrowing as it was cold outside and this is the first time they or I have done any farrowing.  But we had them in some nice bedded pens in the barn with heat lamps available for the little ones.  We were good to go.

Or so we thought.

The first to go was the one Large Black that got pregnant, Margo.  Margo was pretty freaked out by the farrowing process and wouldn’t stay lying down like a sow is supposed to.  She was up and down throughout the whole thing, straining quite a bit and pushing out the piglets (all two of them) quite slowly.  After she was done giving birth she quickly sought out her new piglets and positioned them around her face.

Not good.  The sow is supposed to just lay there and let her piglets find her belly and nurse.  She was having none of it.  If a piglet would so much as think about grabbing onto a nipple she would freak out, jump up, reposition them and lay back down.  Neither piglet survived the night.  She laid on both of them.  From what I’ve read it sounds like Gilt Hysteria, but without the savaging.  Not fun either way.

Margo gets one more chance to redeem herself before she leaves the farm permanently.

Next up was Dottie, the big spotted gilt.  Dottie had a very big belly, so there was no doubt she was carrying quite a few pigs.  I was relieved to see that, precisely on her due date, she was lying perfectly still giving birth to her pigs.  I saw the first 5 or so pigs being born, but then I decided to leave her alone, as my “help” was causing her to start to get up and move around too much.

The next morning I came out to find her with 3 piglets.  By the end of the first day she would have none.

She gave birth to 15 piglets, of which one was stillborn.  She laid on all the other 14 piglets.

What a depressing way to kick off the year.

Needless to say we’re not going to try farrowing in the winter again anytime soon.  That and we’re looking pretty hard at some farrowing crates.

Back to the feeder pig auction…