Well it’s finally here.
We never planted any of our fields last year, our first on the new farm. The fields were already rented out to another farmer when we bought the place, so he got to do all the row crops last year. Naturally, they were all put into corn regardless of their suitability for such a high-demand crop. 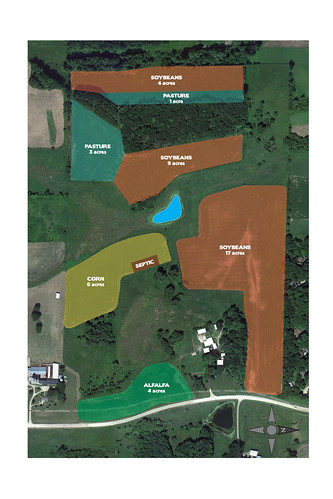 We did manage to take one field out of corn last year, which we planted in alfalfa. We seeded a grazing variety of alfalfa with an oat nurse crop and this year will be the first time we actually get to graze it during the growing season.
Last year we kept all the animals off of the alfalfa so that it would have the best chance at surviving a harsh winter. Now that it had a year to establish it’s greening up quite well, and we should be able to finish some cattle on it in a month or so.

There are a few fields that we’ve cut up, mostly to remove a few areas with very poor soils from otherwise productive fields. These areas will be seeded into a grass-legume pasture mix this year. These two areas are quite steep and have some very poor rocky soils that are not worth planting in traditional row-crops.
Having come from Missouri we’re constantly amazed at the cropping practices that we see in use here in Minnesota. Terracing, and no-till planting are almost non-existent up here, where they are De-rigeur in Missouri. Similarly we see many farmers up here using fall-tillage (not leaving any crop residues on their fields over the winter) which would be unheard of in Missouri.
I attribute many of these differences to the soil types. Missouri soils are thin and relatively poor. Any farmer who doesn’t conserve as much soil as possible won’t have anything but clay to farm in a few years time.

Here in Minnesota the soils are much better and much deeper. Farmers can “afford” to use poor soil-conservation practices because they’ve got a lot more good soil underneath to plant into.

Anyway, we’re choosing to forgo some crop income to protect our vulnerable soils. Within the next month our most erosion-prone soils will be covered in a permanent pasture. The grasses and legumes will cover the soil and keep it from eroding, providing some tasty forage for the cows in the process. 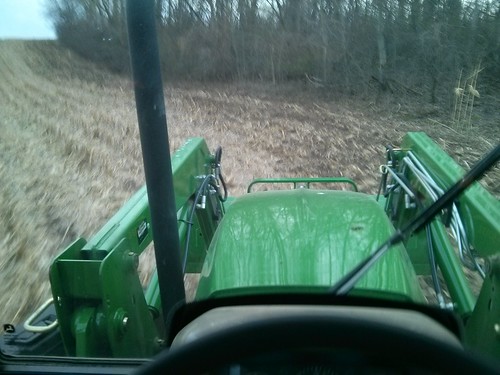 There’s been lots of tractor-driving going on around here lately. All the fields needed to be disced a few times. Last fall’s crop residues had to be reincorporated into the soil. They did a fine job of preventing erosion over the winter and early spring, but now it’s time to make way for the new crops to be planted. 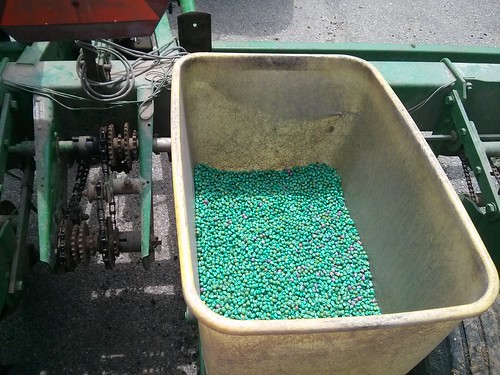 We got the corn crop planted a few days ago. We’ve scaled it back to only 6 acres of corn (in the field with the best soil) and we’re putting all the other fields into soybeans, which is a less nutrient-demanding crop. 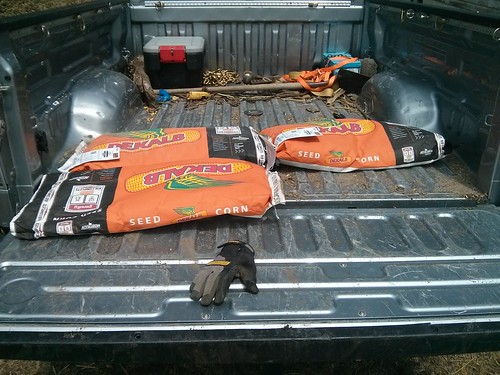 Ever wonder what $1000 worth of seed corn looks like?
Yep, that’s about it, three bags. This stuff is extremely expensive. We’re planting conventional GMO corn this year, even though it’s $330/bag. We don’t have the specialty tillage equipment that’s necessary to plant traditional non-GMO corn. We’re going to end up selling the corn that we harvest because even with a small 6-acre field we could end up with 33 tons of corn, which is wayyy beyond our capacity to store right now.
If you want to farm in a way that bypasses the conventional GMO-centric farm infrastructure, that means  you have to build all kinds of parallel infrastructure yourself. It’s a long process.