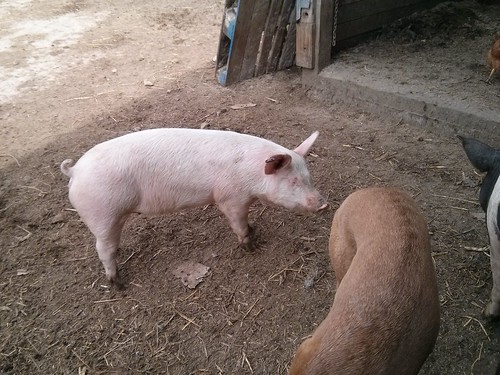 She may not look like much, but she’s feistier than her 100# porcine figure would indicate. She’s gotten into the habit of chasing off any of the dogs who happen to venture near her. In this photo she’s thinking pretty hard about chasing off Cinco, who’s hindquarters are in the middle of the frame.
While Cinco is fairly timid, only halfheartedly chasing off pigs who vie for food that he’s claimed, this particular pig has chased off our cattle-dog Bear on a few occasions.

So far #422 has a healthy respect for humans.  We’re gonna just hope she keeps that up; no need for an angry 250 pound pig.