It’s that time of year again, the hay auction has started back up for the winter. Due to some construction going on at the Pine Island Coop, the hay auction has been moved to the Livestock Salebarn in Zumbrota. That’s pretty great as far as I’m concerned. The auction is now about 1.5 miles from my front door. Can’t beat that kind of proximity. 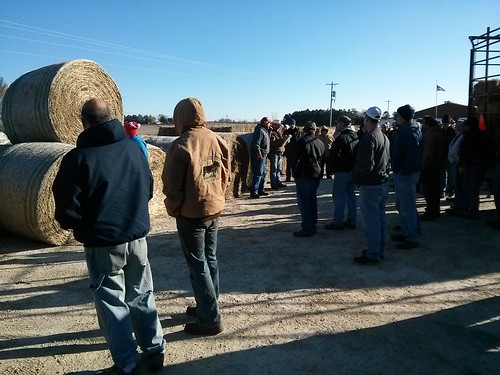 Anyhow, I wandered on down to the auction this morning to get an idea of what we’re going to need to spend on hay this winter. I’ve been keeping an eye on Craigslist, and have gathered that hay has come down in price by 25-30%. But around here Craigslist is always higher than market price for hay and straw. Checking the USDA hay report can help get an idea of the true market prices for hay, but the auction is where the real prices are set.

At the auction I quickly found, much to my relief, that prices were much lower this year (at least for now).   Last year I paid $55/bale for some pretty rough-looking hay.  This year the junky-looking hay is bringing $22/bale.  That’s quite an improvement, at least if you’re a buyer.  The top end of the market held out about the same.  The highest prices today were $87/bale, compared to $180/bale last year.  Only the small square bales of hay were still pricey.  There weren’t many lots of small bales for sale, so they held up near $8/bale until the very end of the auction.

All in all, I think it’s shaping up to be a much better year for we hay purchasers. I also really like the fact that the Zumbrota salebarn is hosting the auctions.  That means that they have the auction report posted online soon after the auction ends.