We’ve come to the realization that we’re fighting a losing battle against some pretty serious pasture weeds on our farm. 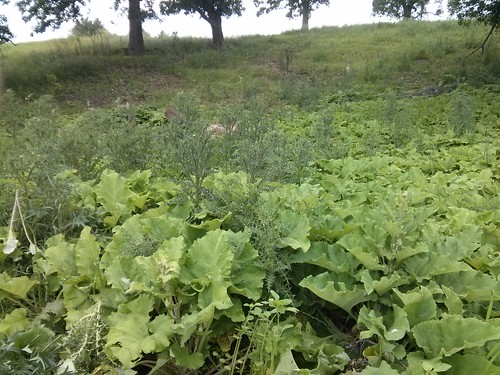 There’s the usual bull thistle and Canada thistle, along with burdock and a little bit of nasty wild parsnip.
We tried to keep the weeds in check with mechanical means, a scythe and our 7′ John Deere Brushhog, but we’re quickly falling behind.
It was time to try a method of biological control, namely goats.

Cows won’t eat any of the aforementioned weeds, as they prefer to eat grass and legumes. Goats on the other hand, prefer to eat a lot of broad-leaf weeds and leafy browse that cows won’t normally touch.

There were, of course, a few problems with this solution. First, you have to keep the goats in the fences. My fears about this were largely allayed after talking to a farmer who raises Boer goats inside of a 2-wire electric fence. We use at least a 2-wire electric fence for our pigs, so goats shouldn’t be a problem right?

The second problem is that goats, like all livestock right now, are absurdly expensive.
So how was I to resist when I saw someone advertising two free goats? 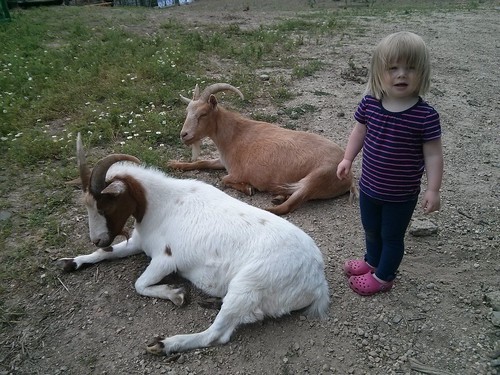 Meet the newest additions to the farm: Macklemore and Ryan Lewis.
As it turns out, paying for goats was probably a good idea. These two are Pygmy goats, which as the name suggests, means they are quite small. They take a 2-wire electric fence as a mere suggestion, easily slipping underneath a 20″ wire to go exploring.
Furthermore they seem to have been “pet” goats, being accustomed to being fed grain. They’d rather stand around and beg for feed than go out and eat any weeds, not that they could eat much at their diminutive size.

I think we’ll try this whole goat experiment next spring with some proper Boer goats and see if they don’t do a bit better job of things.  I don’t have the first clue about raising goats, but I’m not going to let a little thing like that get in my way.