If you are blessed with a better memory than mine then you may recall that I started to make a cowhide rug a little over a year ago.

I may not have such a good memory, but my lovely wife is on the case.  She has made certain that I never forgot the cowhide rug that I promised her.  Much to her chagrin, I have my own timetable for dealing with such things.

But ever since the garage/shop has been filled with new welding projects the space occupied by the salted cowhide is desired for other purposes.

So I finally decided to go about procuring all the ingredients called for in the tanning recipe.  Since the recipe is for somewhat smaller hides, I decided to double it just to be safe.

7 cups of battery acid: check and then some. 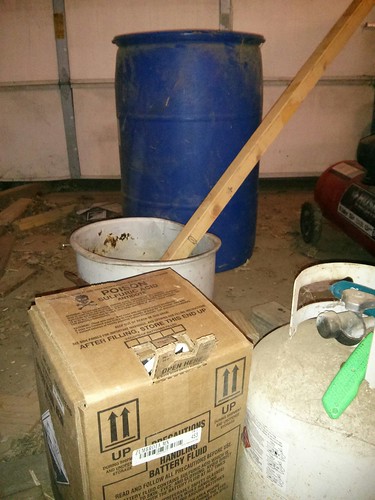 The auto-parts store only had one of the smaller 750ml bottles of battery acid (I needed three).  So I had to settle for the next biggest size, 5 gallons. What am I going to do with the remaining 4.5 gallons of battery acid?  I have no idea, although I know some folks with a bunch of huge batteries in their basement, maybe they’ll be able to use it eventually.

After a good soak and several good rinses, the cowhide was ready to dry (again).  This time it only took a week. Then comes the fun part, getting the last of the gunky bits off of the back.

There were a few remaining bits that had to be cut off with a knife.  I attempted to use a drawknife as a fleshing knife, but it’s not exactly ideal. I ended up doing it the old-fashioned way, with my fingers and a pocket knife.  The acids and salt left in the cowhide were none to kind to my fingertips afterward.  If I were to ever do another hide I’d invest a few dollars in a fleshing knife and make up a fleshing beam.

Instead of manually wire-brushing the back of the hide, I decided to speed the process up a bit and use the big angle grinder with a 4′ wire cup brush to do the job.  It worked out just fine, although I’d be hesitant to use it on a thinner hide. 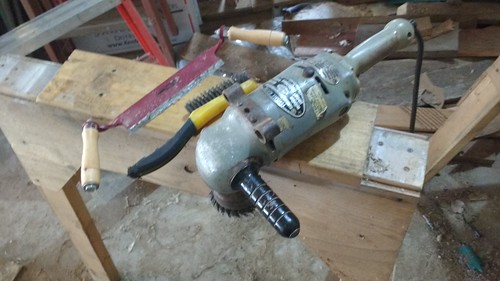 After the wire brushing I was tired of working on the cowhide and decided that I was ready to call it finished. I dragged it in the house and put it in place to await the final verdict from my wife. 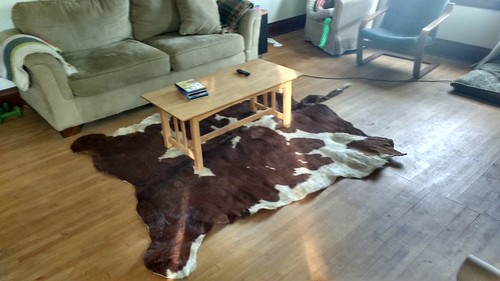 It showed up on her Instagram feed less than 24 hours later, a sure sign of a high WAF.  Now there’s just the small matter of flattening it out a bit.