So I went to both of the local feed mills today to shop around for chicken feed. 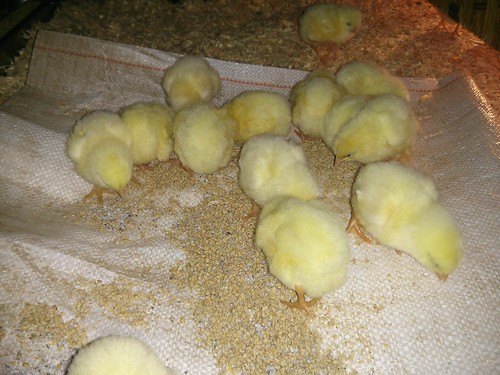 Gerkens Feed is the mill in Zumbrota, only about 2 miles from the farm, and Farm Country Co-op is in the neighboring town of Pine Island, about 6 miles from the farm.  I would love to use the Gerkens, but I’ve haven’t been happy with their feed in the past.

I thought I’d give them another shot this time, since I’m finally able to order feed in bulk.  Bulk feeds are usually easier to customize, so maybe we could avoid all the stuff I don’t want like antibiotics and animal by-products.

I talked to the lady who works the counter and she tallied up the ingredients to their chicken feed to give me the price, a reasonable $460/ton.  It didn’t take long before I spotted a problem.  One ingredient on the computer screen read “BROILER CONCENTRATE AMP.”

A quick question confirmed my suspicion that “AMP” stood for Amprolium, an antibiotic.  Normally, you could just leave out the antibiotic and the feed would be just fine for our purposes.  But, this antibiotic is part of the very important “concentrate” part of the chicken feed.  The “concentrate” is a high-protein part of the feed that usually contains the important vitamins, minerals and amino-acids.  This concentrate is added to a cheaper base grain, like corn, barley, wheat, etc. to make a “complete” feed.

You can’t really leave out the concentrate part of a feed, that would deprive the chickens of the protein and important amino-acids (Methionine in chickens) that they need to survive and grow.

The lady politely informed me that they did have non-medicated chicken feed, but only in bags which would be $540/ton.  They would be happy to make me up a custom feed mix, I’d just have to come up with one on my own.  Coming up with feed mixes isn’t something I have a lot of time for.  Sure, I’ve been poking around on the internet, and coming up with a few really helpful chicken feed mixing resources[PDF], but feed mixes are pretty complex and too important to get wrong.  It’s something that I’d love to devote some time to figuring out, but not this year, I’ve got bigger fish to fry.

I headed on over to Farm Country Co-op next.  I talked to them a few weeks ago about bulk feed, they quoted me almost the exact same price, around $460/ton.

The guy working the counter printed me off a list of the ingredients and we went over the list.  I told him to drop the antibiotics and the meat & bone meal.  He suggested replacing the meat & bone meal with soybean meal to keep the protein level up.  I agreed. We arranged a time tomorrow morning for the feed to be picked up.

Why can’t they all be that easy to work with?