We’re raising our second, and probably last, batch of Cornish-Cross meat chickens this year.
They look beautiful when they’re plucked and processed, showing off that double-breasted chicken physique that the American public has come to know and love. 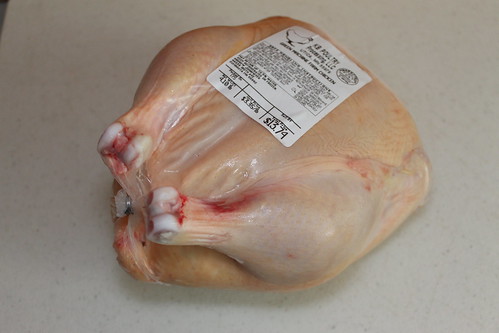 But I’ve never been a big fan of the Cornish-Cross chicken. They’re bred for growing fast, getting big and not much else.
They don’t forage as much as a normal chicken. They’re pretty gross to pick up, because they’re hot and squishy, much unlike an egg-laying chicken. And they have an amazing propensity for dying young. 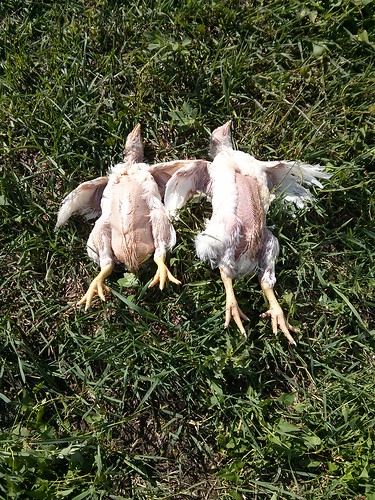 It was 82°F this morning at 9:30 when I went out to move the chickens. They were all huddled up against the back of their pens, trying to stay in the shade.
When moving the pens, a slow one will occasionally get it’s foot caught under the back edge of the pen. This is pretty normal, and only requires a quick lift to free the chicken. The chicken quits freaking out once it’s leg is freed, and goes about it’s chicken business.

Except for today. The mere act of getting a foot caught was too much for these two.

They freaked out, overheated and died.

I always refer back to Joel Salatin’s NASCAR-chicken analogy.  Essentially, the Cornish-Cross is a finely tuned racecar of a bird.  They do one thing (grow fast) and they do it very, very well.  But for being so powerful, they’re awfully fragile; NASCAR’s can’t handle bumps in the road.  The same powerful motors that they use to zoom across the finish line can just as easily hurtle them into a wall at 200mph.

So too with these chickens.  Due to their amped-up metabolisim they can’t take much heat.  Because of their sparse feathers they can’t take much cold either.  Cornish Cross also have problems with congestive heart failure [PDF].  They are bred to grow so quickly that their muscles often outgrow their internal organs, leading them to die prematurely.

We raise these birds because they’re what our customers want to buy. But I keep thinking there has to be a better way. In years past, I’ve tried to hatch our own hybrid meat birds, with limited success. Our farm-hatched hybrids were indeed better foragers, and much more resilient, but they were very slow growers and lacked the carcass characteristics that most folks have come to expect.

Farm-hatched meat birds seemed like a great idea, but in reality, we don’t have the time and energy (or the spare eggs) to devote to hatching out chickens in the numbers that it would take to be successful. Not to mention, the resulting chickens would be very expensive due to their slower grow-out.

I’m thinking that we’ll try some Red Broilers next year alongside our first batches of Cornish-Cross.