This is our bull. Like most of the cows he has no name, just “the bull.”
The bull is up for sale. 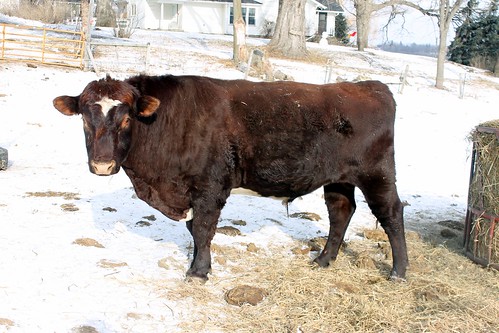 It’s not that we don’t like him, he’s just done his part on our farm. He’s been with us for 3 years, and fathered several young lady cows (heifers) that we’re keeping. So in order to keep things all genetically-kosher we’re planning on replacing the bull with a younger unrelated fella. 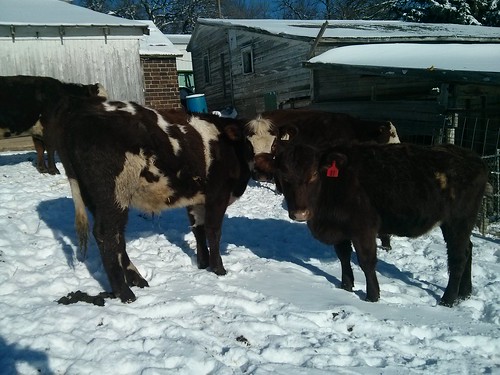 These two are some of the bull’s offspring. On the left (#71) is the only cow we have with a name: Paint. Paint is a steer (a castrated boy) who’s going into his 2nd, and final, year of his life. He’s a very nice steer, very quick growing, with a very pretty paint-job. It’s a shame Paint wasn’t a girl, we’d have kept him in a heartbeat.
Standing next to paint (#81) is one of the bull’s young daughters. She’s a pretty good-looking heifer who will be bred early this summer, and deliver her first calf next spring.

We’re currently searching for a new bull.  We’re looking at a few different Galloway bulls and perhaps a Barzona (if we feel like driving all the way to Des Moines.)

We’re looking for a bull of a slightly smaller breed, one that will finish a bit faster on grass.  We already looked at a couple Belted Galloway bulls last week, but they were too small.  The beltie cows were no bigger than a Dexter, with the bull weighing in at 1100# max.  That’s a bit too small, we’re trying to hit the sweet spot in cow size.  Too big and they take too long to finish on grass, like our old Charloais cattle (our bulls were probably 2200#.)  Too small, and you just don’t get that much beef.