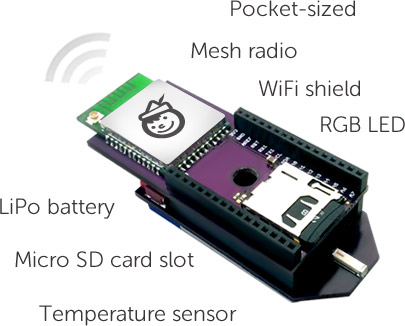 As an avid newshound and techie, I’ve been following this week’s 2013 CES (Consumer Electronics Show) coverage.  It would seem that the “internet of things” is really taking off.

One of the most talked about new products from CES is the Smart Fork.  Seriously.  Mostly it’s being made fun of, but again, the “internet of things” is taking off when forks are getting in on the act.  The fork isn’t alone in the kitchen either, the ovens and refrigerators are getting wise too.

And it’s not just smart objects that are having a good year. Open source software is coming out in a big way.  By “In a big way” I mean that Ford Motor Company is getting on the open source bandwagon by introducing an open-source platform to all of their vehicles.  It’s even an Arduino & Android based system!

But the thing that I’m most excited about this month isn’t even at the CES show.  It’s not even for sale yet.

It’s a little Arduino compatible board called Pinoccio that incorporates a lot of cool features into a tiny package.  It’s basically a souped-up Arduino with an Xbee radio, rechargeable battery and temp sensor already installed.  Plus it’s made to use a little Wi-Fi shield for internet connectivity and SD card for use as a tiny web-server.

I could see a Pinoccio board being very useful for my upcoming Farm 2.0 projects, particularly pastured broiler pens.  They’re really quite a bargain (if they get to production at their current price) since they combine: an Arduino ($35) Xbee ($23) WiFi Shield ($55) Battery ($10) and Temp Sensor ($5) for $99.  It’d be $128 and a lot of assembly if you bought it all separately.

Anyway, if the Pinoccio is the kind of thing that you’d be interested in go on over to their Indiegogo page and throw a few bucks their way to get them started.  They’ve got until Valentines day to raise their goal of $60k to cover the costs of FCC licensing and the first production run.