Well, it’s only 3 more days until the first of the chicks should start hatching, so there were some incubation-related things on the to-do list this evening.

At about this time (3 days before the hatch) you’re supposed to quit turning the eggs and raise the humidity to around 80-85%.  The egg turning part is pretty easy.  I took the eggs out of their trays and put them in a hatching tray that slides into the incubator. On the incubators inaugural run we had one chick hatch out in the middle of the night and then get all peppy.  Unfortunately, the low sides of the egg trays aren’t much of an obstacle to a peppy little chick and it fell over the side and died. This time I made up a hatching tray that has higher sides and no extra space around the edges that a chick could fall through.

Humidity is more of a challenge.  I’ve seen folks who use little reptile terrarium humidifiers controlled by humidistats, and while that looks like quite a slick setup, it’s out of the budget for this year at least.  Fortunately, we have a relatively easy low-tech solution. 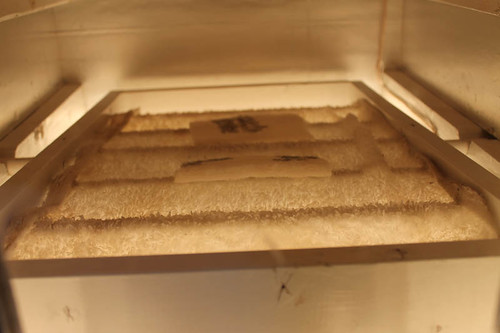 I keep one egg tray in the bottom of the incubator with a wet rag on it.  I just re-wet the rag two or three times a day, and it seems to keep a relatively constant 75% according to my $5 pet-store hygrometer.  I’m not too worried about that 5-10% that I’m missing off of the recommended 80-85% because hygrometers are notoriously inaccurate, and my incubator windows are fogged up, which tells me that the air in there is near saturation.