Wow did the pink slime story ever blow up or what?  The story circulated for several weeks on farm and food blogs, and then went mainstream.  Now BPI (the makers of pink slime) are closing 3 of their 4 pink slime factories.

Predictably, the big-ag proponents were behind the curve, finally pulling out all the stops with the “Dude it’s Beef.” campaign.  They are proving what we’ve suspected all along, that they’re reactive, and alarmingly tone-deaf to the public’s growing concerns about where their food comes from.

So with the demise of pink slime one more fake-food foe is vanquished.  What now?

Nicholas Kristof has the answer, reporting Monday on what I suspect will be the next big food controversy.

Yes, as it turns out, most of the chicken you see in the store contains small amounts of Arsenic, caffeine, anti-histamines, acitomenophen and banned antibiotics.  This is by far a worse state of affairs than pink slime ever was.  Pink slime, for all of it’s stomach-turning qualities was never a genuine threat to the health of consumers.  Pink slime was offensive because consumers did not want to buy a product (ground beef) that contained 15% of a re-processed waste product without being labeled as such.

The drugs that are currently being fed to chickens are an entirely different matter.  This is not a matter of processing.  We know these drugs are being used to feed the animals we eat.  We know that small amounts of these drugs wind up in the animals body, in the food that we eat.   The FDA insists that chicken is safe to eat, and that consumers will not be subject to harmful levels of arsenic or any other drug through the consumption of chicken.

The public has a right to be a wee bit skeptical of the FDA’s claims.  After all, there have been an alarming number of recalls for FDA approved drugs in the past decade, epitomized by the Vioxx scandal.  And the Union of Concerned Scientists has consistently found that FDA scientists are subject to political and industry pressure in their studies.

So there is admittedly uncertainty in the results of current arsenic and drug studies.  The FDA’s studies suggest that the levels of drugs found in chicken (and pork) are safe, but there are few other independent studies out there to verify those claims.

If only there were a tool that could help us make a decision even in the face of uncertainty.  Luckily for us, this tool exists and it’s called the Precautionary Principle.  The precautionary principle is essentially a decision-making tool that allows us to make the best decision even when we do not know what the outcomes will be with any certianty. 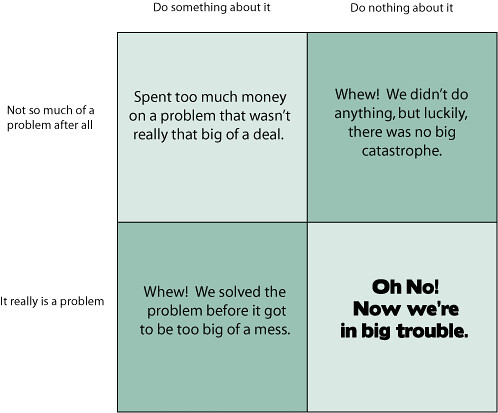 For example, lets say that you went to work and you think you might not have any more milk at home.  Either you are out of milk, or you are not.   You can choose to buy milk on your way home, or you can choose to not buy milk.

With all of the options laid out before us, it’s probably better for us to go ahead and pick up a carton of milk on our way home.  The worst that could happen is that we’re out a few bucks.

The stakes are raised a bit higher when we replace milk with arsenic and other pharmaceuticals.  Now instead of not getting a good breakfast, we’re possibly ingesting carcinogens and drugs which could have major effects on our health.  It makes sense to pay a few cents more for chicken that is not fed any arsenic or drugs even if it turns out to be perfectly safe.  The truth is that for now, we just don’t know, and it’s too big a gamble to take with our lives.