If you tuned in earlier this week, you may have noticed a bit of uber tech-geekery going on around here.

There is, however, one significant obstacle to setting up a gaggle of networked mini-computers all over the farm.  Namely, how the heck are all these little gadgets supposed to talk to each other?  In a typical office environment networking is easy enough.  A little Cat5 (ethernet) cable, a Wi-Fi router and pretty much any building is as networked as it needs to be.

Of course, when we extend this type of thing to the farm setting the Cat5 wired network goes right out the window.  Buying and trenching or stringing up all that cable would get prohibitively expensive in a right hurry.

But that Wi-Fi stuff, now there might be something to that.  But when you start digging around to find out the typical range of a Wi-Fi access point (WAP), then you run into some trouble.

WAPs support a range of up to 150 feet (46 m) indoors and 300 feet (92 m) outdoors. Another rule of thumb holds that the effective range of 802.11a is approximately one-third that of 802.11b/g. Both of these rough estimates fall on the high end of the range seen in practice.

Damn, that’s gonna be a real drag on networking a whole farm if you need a Wi-Fi access point every 100 yards.

On the other hand, there are plenty of how-to’s out there on the internets that show how to make high-gain Wi-Fi antennas.  From the “Cantenna” to the Sattelite-dish based Mega-Cantenna.

Some of these claim effective ranges of up to 10 miles.  Given, these ranges come at the expense of directional coverage, but that’s still pretty impressive stuff.

So we’re still left with the question, how much Wi-Fi do we really need?  How crazy and expensive do we need to get to cover a whole farm with Wi-Fi coverage in real life (that’s IRL for all you non-internet folks)?

I decided to find out with an old Wi-Fi Router I had laying around from when we last switched ISPs, and my lovely wife’s iPod Touch. 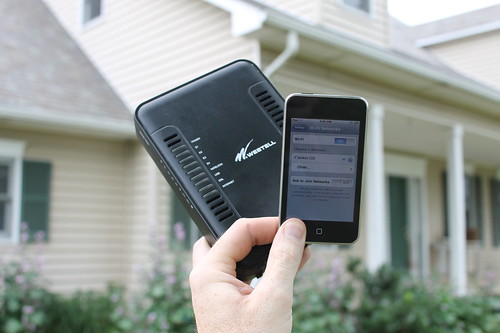 So first order of business was to reconfigure the router. Fortunately for me, it’s a new enough router that it has a build-in bridge mode.  Unfortunately, this means that if it’s gonna repeat your wireless signal it has to have it’s own hardwired Cat5 connection to the existing router.

So I ran a length of Cat5 cable out of the window, up on to the roof and hooked up the “bridge” router with an extension cord.

I then grabbed the iPod and proceeded to walk around the farm until I didn’t get a Wi-Fi signal anymore.  Much to my surprise, I got all the way down to the road (over 300 yards) and still had 2/3 bars of signal strength! 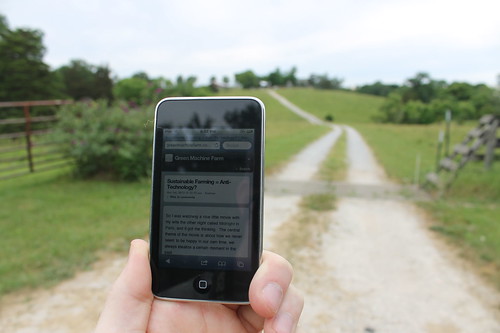 As it turns out, if you have a line-of-sight to the WAP, then the range is really quite excellent outdoors.  Of course, if you don’t have a direct line-of-sight, then the range is really more like the indicated 300 feet.  The further away you get, the less it takes to disrupt the signal.  I took a little walk over to the new Tire-waterer in the field to the left of where the above photo was taken.  Even though it’s probably (slightly) closer to the house, all of the trees in the holler blocked the signal completely.  But as soon as you got past the trees, and back into line-of-sight the signal came back nice and strong.

With this kind of range you could cover a very large area with just a couple Wi-Fi repeaters up on poles that are within a line-of-sight of the central WAP/Router.