It must be farm-walk season here in the midwest because we just went to another one last night.  This one was put on by the Boone County NRCS office, and held at the Martz Farm (they don’t have a website, so the map will have to do).

The Martz farm was a bit more of your typical NRCS-endorsed Management Intensive Grazing (MIG) operation.  This is very much the type of management that was taught at the NRCS grazing school that my dad & I attended earlier this year.

The whole thing kicked off with a dinner provided by NRCS. Fred Martz then got up to say a few words about his farm, and then continued to say a few words for the next half hour. We quickly figured out we were in for a long evening because he’s a talker. 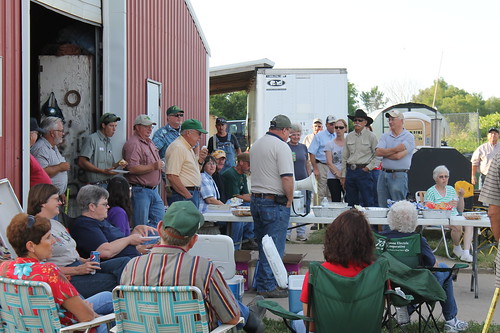 We then loaded up on the 3 trailers and headed off for the tour.

First stop: sheep.
All the ewes had been brought up by their barn for some reason. They have around 100 head of Katahdin hair sheep which are all grassfed and grass-finished. There’s an LGD (a Pyrenees) in there if you look real close.
I was pretty amazed that a farm that large (450 acres) was that close to the city limits. I could tell just by some of the plants growing (bush honeysuckle, trumpetcreeper & redbud) that we were close to a city.

Next up were the finishing cattle. These three were the remaining finishers for the spring. 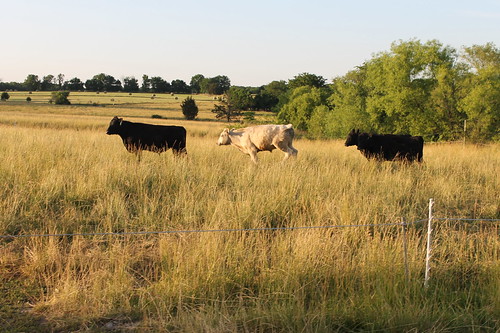 Not bad looking, for angus (I’m not a giant fan of the breed). They weren’t fattened out completely yet, but they were getting there. Fred Martz explained that they have trouble finishing cattle on pasture, so they supplement 6-8lbs of corn per head per day to fatten them up. 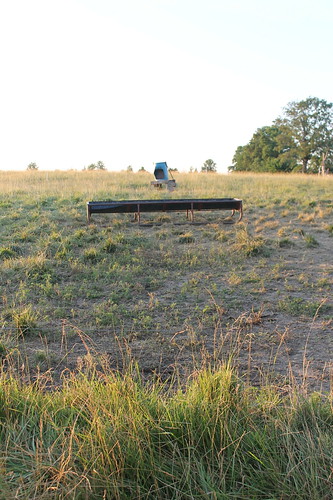 While he probably has a valid point given the likelihood of endophyte-infested fescue in his fescue-dominated pastures, it does illustrate one of the differences in the MIG approach versus the Mob-Grazing/Holistic management approach.
Did I mention that we just happened to run into Greg Judy and his interns and several folks from the Green Hills Farm Project there?
It made for some interesting commentary.

Anyway, the tour continued, on past a few sheep that hadn’t made it to the barn. They were without the protection of a guard-dog, but they did have a guard-llama. 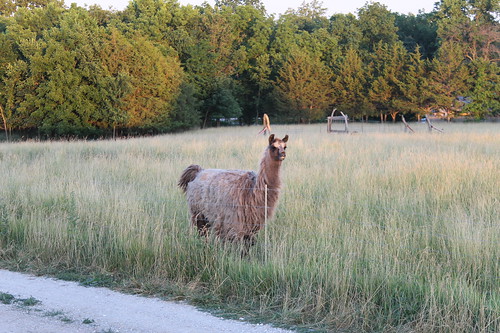 As the tour wound on we stopped out by their best paddock, paddock 12 (of 40!) where Fred explained their nutrient-management program. 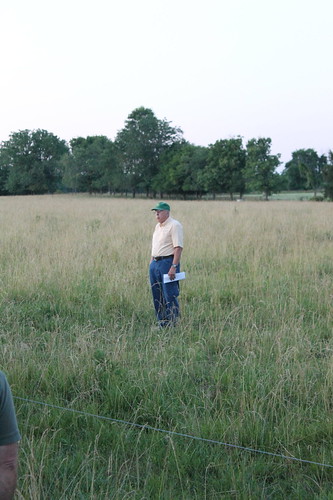 Their paddocks do get some occasional commercial fertilizer and lime as recommended by soil tests. Again, this is pretty much by-the-book NRCS MIG practice.

The last stop on the tour was the spring-calving brood herd. They run two separate herds, one spring and one fall-calving. These cows were currently calving, with several replacement heifers in the mix as well. Their red angus bull was in with them. 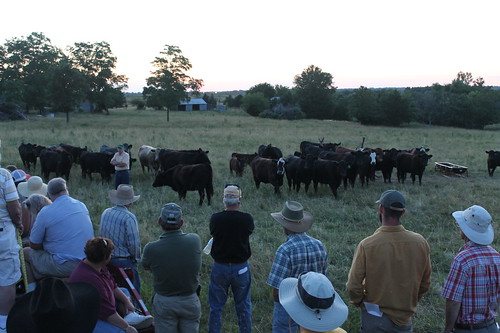 Fred explained that they were in the process of switching over to red angus to get more heat-tolerance. They apparently use AI sires for a handful of cows every year, with one bull in to make sure everyone else gets bred. He also said that they’d had some trouble with conception rates, so had started feeding corn to their breeding cows to get their conception rates back up where they needed to be.

There were a couple of cows, the one on the far right in particular who were damn spooky. They were transfixed with two little girls in the crowd, and it’s a good thing the little girls weren’t being too loud or active, as those cows might have ended up in another paddock. 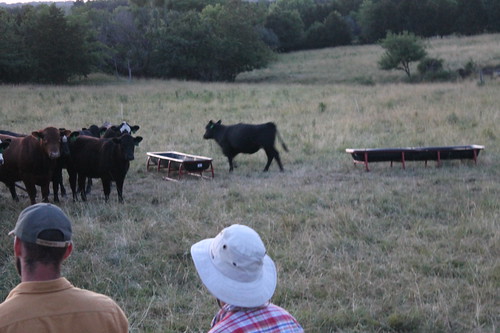