So here it is, the depths of winter, time to get working on a long-neglected farm 2.0 project: the chicken coop controller.

The thing about having free-range chickens is that they need to be let out every morning and shut-in every evening.  That’s a minor inconvenience when your chicken coop is a few hundred feet from your front door, but if you’re contemplating an eggmobile it becomes a much bigger hassle.

Luckily this is the 21st century, and we have the technology to automate this particular task.  Sure, you can go out and buy an off-the shelf chicken coop door opener/closer, but where’s the fun in that?  Plus, it doesn’t really stick to our criteria: cheap, open source, adaptable, green, and labor-saving.

So here we go.

Off to build our own chicken coop controller. 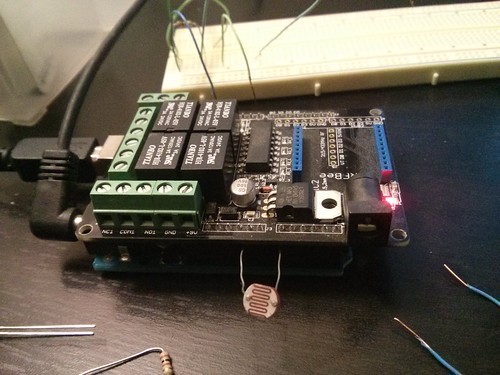 I’ve started with the gold standard of open-source DIY programmable controllers, the Arduino.  The Arduino is basically a tiny $30 computer with a bunch of different inputs and outputs.  It’s a blank silicon slate that, with a little programming, can be made to do just about anything.  Programming anything other than a TI-85 calculator is new to me, so I keep my copy of Simon Monk’s Programming Arduino: getting started with sketches close by.

To do some specific tasks the Arduino needs a bit of help. Most of the time you just need a few simple electronic bits like sensors, resistors, switches and the like, but occasionally you need a bit more help.

I’m planning on opening a chicken coop door with an electric motor which the Arduino can’t handle on it’s own (and I’m not smart enough to figure out how to control a motor with a lone transistor) so I chose the Seeed studio relay shield to help the Arduino out.

After an afternoon of re-learning all the Arduino programming I forgot in the past year or two, I managed to cobble together a little bit of code to get the chicken coop controller off the ground.

With (so far) only a single photocell, the controller can cycle one of it’s relays when it gets dark out.  In it’s current state the relay is activated about 30 minutes after sunset, with a 30-second rolling average to keep transient shadows, dark clouds, etc. from triggering the “door” to close.

Phase two will involve actually adding a motor, high & low limit switches, and an indicator light (or two) and all the associated programming.  Maybe by that point I’ll be able to do more than a couple hours of tinkering with the Arduino before my head hurts…

And for anyone who’s interested, here’s the code so far: