Over the past few weeks I’ve been keeping an eye on a few active tree swallow nests in our tree swallow houses. Everything was going pretty well until today.

Today I swung by to check on the six tree swallow chicks that were within a few days of fledging.

I was shocked to find all but one of them dead. 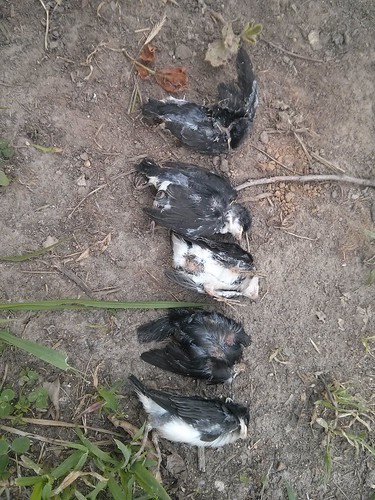 After leaving the surviving chick alone for a few hours I noticed that the adult tree swallows where nowhere to be found.  They had abandoned the nest for some reason, leaving their chicks to starve.

When I went to pull the surviving chick out of the nest I realized the cause of the predicament.  The nest was seething with thousands of mites. Yuck!

Apparently mites are at their worst in very wet weather.  We just wrapped up the wettest June on record, so it would follow that we’re in the midst of a very bad year for mites. 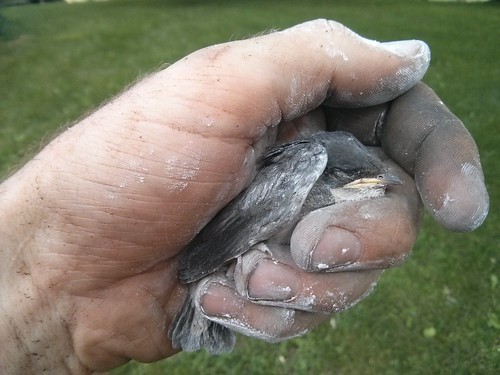 I took the survivor over to the chicken coop where I gave him a thorough dusting with wood ash and DE (diatomaceous earth), which is what we give the chickens to control mites.  He (or she) was surely relieved when there was a veritable mass-exodus of mites from his feathers.  Not knowing what to do next, I put in a call to the Wildlife Rehabilitation Center of Minnesota and will probably try to drop him off at their place in the cities when I’m up there next.  I’m guessing he’s 13-14 days old, which means he could fly in 4-8 days if he gets enough to eat.

A quick check of the other nest boxes revealed one other abandoned nest with fledglings (all dead) and several other nests that had been abandoned before chicks hatched. Many of the nest boxes had mites crawling around on top, trying to hitch a ride to a new home.  I gave all the boxes a dusting of DE, which should help keep them bug-free now and well into the future.
Here’s hoping that next year shapes up a bit better for the tree swallows.