We’ve just wrapped up our crop planning for the year, and here’s what it looks like. 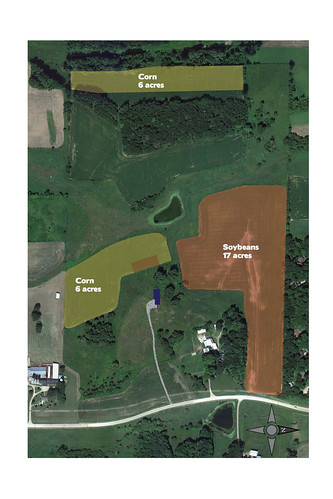 This year, at least on the crop map, we’re going to look like an awful lot of other farms around here: planting corn & beans.

True to form, we will be doing things a bit differently than most.  Sure, the soybeans we’ll be planting are the same-ol’ same-ol’ variety that we planted last year, but soybeans require processing (roasting specifically) before they can be fed to livestock, so we plan on selling our beans at the local feed mill just like everybody else.

The corn is a different story.

With all of the pigs, chickens and turkeys that we raise, we end up buying a fair amount of corn.  And we know something that many other farmers are just beginning to figure out: there is a lot of demand out there for critters that are fed a non-GMO diet.  I see a lot of farmers online (I’m looking at you r/farming) who can’t seem to accept this new reality.

It seems that they’d rather spend their time complaining that:

A.) consumers don’t know what’s best for themselves

B.) they can’t make any money farming

The solution seems pretty straight forward to me, just grow what people want to buy and you’ll solve both problems (radical, I know).

So this year we’re getting into the non-GMO corn game.  Nobody around here sells non-GMO corn, so this is the only way for us to get some to feed our critters.  We’re putting 12 acres into corn this year, which should yield 1,980 bushels if we get the same yield that we did the last time we grew corn. That’ll put a pretty big dent in our feed bill.

I was very pleased to find out, upon crunching all the numbers, that the non-GMO corn we’re planting ought to come out a little cheaper than the last corn crop we planted. It’s said that when planting non-GMO crops you save some money on seed, but spend more on chemicals (herbicide & pesticide) making the non-GMO crop more expensive.  That might have been the case for us if we weren’t following a better crop rotation.

Crop rotation saved us a fair bit of money on the fertilizer, beans fix nitrogen into the soil which means the crop that follows beans needs less fertilizer.  But even if the fertilizer was the same the non-GMO corn would only be $9/acre more than GMO corn.  The savings on seed is almost enough to offset the increased spending on chemicals.

So that’s the plan.  It’s only a plan on paper at this point, so we’ll see how it works out as we transition to farming in the dirt later this spring.