I was practically raised at auctions. Being a former auctioneer, my Grandad was an avid auction attendee and I got to tag along with him to quite a few. Grandaddy would always buy stuff at an auction if he deemed it was “goin’ too cheap.”
As a kid it was awesome, he’d bring home a trailer full of stuff from an auction. If it was an estate sale then there’d be boxes of books, tools or dishes, and occasionally a box of old toys.
As a teenager auctions were awesome because my first car came to me by way of an auction. It went too cheap.

So fast forward a few years and I do enjoy a good auction. But my Grandad’s “goin’ too cheap” gene must have been recessive, because I got just the opposite. Everything at an auction seems like it’s going for too much money. It probably has to do with the fact that the prices rise as the auctioneer calls.
Anyway, I usually don’t come home with much from the hay auction because it was all too high. When I do buy hay, you can rest assured I bought the cheapest lots of the day. 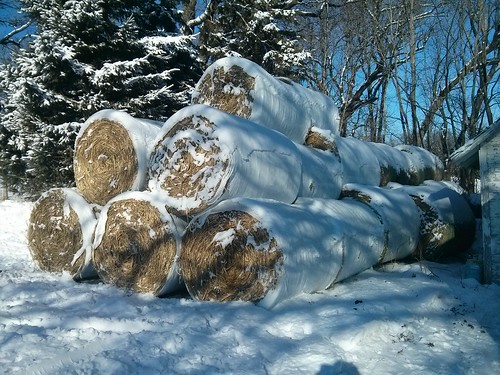 Someone brought 4 lots of this BMR Sorgum/Sudan grass haylage to the last hay auction. I ended the two biggest lots of it.
There has seldom been any haylage or baleage sold at these auctions. When it is sold, it usually goes for around the same price as plain hay, higher if the dairy farmers deemed that it was good stuff.
I had never seen Sorgum/Sudan Haylage before, but I assumed that like any Haylage it would be pretty good quality , and I knew I’d heard that Sorgum/Sudan grass was supposed to be a good forage crop.

Apparently I was not the only one there that day who had never seen Sorgum/Sudan Haylage. Nobody would bid on the stuff, they kinda looked at it like it might be radioactive. I won the first lot for $26/bale. To put that in perspective, most hay was going for $55/bale, and cornstalks (used as bedding, not feed) were selling for $25-32/bale.

As long as this stuff was cheaper than bedding, I figured we couldn’t go wrong buying it as feed. Even if it turned out to be crappy feed, it would make for cheap bedding.

When I got all the hay home, there was a bit of concern over how well the cows would eat it. The Sorgum/Sudan haylage was fairly stemmy, but the more I looked into the BMR (Brown Mid-Rib) Sorgum/Sudan grass, the more it looked like the stems wouldn’t be a problem. Apparently the BMR varieties have less lignin in the stems, so they’re more likely to lodge, but have more palatable stems. It’s apparently a very good forage-specific sorgum variety. 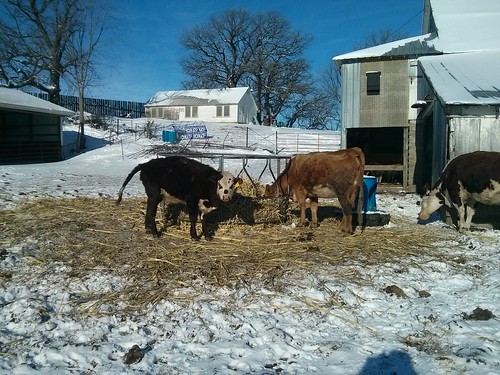 The next day we fed the first bale of the haylage, and the cows promptly tore into the stuff. Stemminess wasn’t a problem, they ate every last bit of it.

After a week or so of feeding the stuff, I can report that there are exactly two problems with it. First, when it gets really cold (-20°F) the cows have problems eating the haylage because it freezes pretty solid at those temps. Second, when it’s cold the net-wrap under the silage film is pretty hard to get off because, again, it’s frozen.

So needless to say, if there’s any more of this stuff floating around the next auction I’m going to pounce on it.